Since previously assessing the Sardinia Bay Golf & Wildlife Estate about four years ago, conservation consultant Wallie Stroebel was “highly impressed” with what he saw during his most recent visit.

Stroebel is a wildlife consultant with Conservation Management Services, a wildlife management company which has worked on more than 1 000 projects across Southern Africa.

After his visit two weeks ago, Stroebel said from a nutritional quality point of view the estate had much to offer in terms of its wildlife carrying capacity.

“Ecologically there is not a big threat of alien plant invaders which is very prevalent on most other properties,” Stroebel said.

“Considering that the Eastern Cape has just come out of quite a severe drought I was quite impressed with the grass and fodder production on the estate.

“The grass components of the properties have a lot of potential to provide sustainable food for the animals,” he said, adding that the animal mix was well within the ecological capabilities of the estate.

“There is very light to moderate utilisation of what’s available [on the estate].

“The estate’s 93 hectares is more than capable of sustaining the animals already in the area, such that we can even increase the carrying capacity.”

Another positive aspect Stroebel took note of was the sustainable condition of the areas surrounding the several water points on the estate.

“Often areas around water points are degraded due to too many water-dependent species.

“At the Sardinia Bay Estate I did not see any real negative impact around the water points. I specifically went to look at that and it looked very good.”

He added that he had also not discovered any hot spots of denuded ground cover or patches of soil.

“That’s normally one of the first signs you see when things start to go wrong; when you see bare patches forming. I didn’t observe any of that.

“There are patch-selective species on the estate such as the blesbok and springbok. They tend to select a certain area and stay in that area indefinitely and overgraze.

“I didn’t see any of that [on the estate] which reconfirms that the production of the grass layers is higher than the actual consumption.

“The property definitely has the scope to add additional species,” he added.

Stroebel emphasised that they were looking more at increasing the species list on the estate than necessarily the total animal population.

Some new species on their agenda, he said, included eland, impala, nyala, red hartebeest, waterbuck and giraffe – to utilise the top layers of vegetation around the estate.

He said it was important that wild animals brought onto the estate were not hand-reared; in other words animals unafraid of humans due to previous interactions.

“The animals on the estate need to be habituated,” explained Stroebel. “They need to be used to the human surroundings, the golf course and cars.

“Tame animals will become overly stressed [by the presence of humans], which can lead to them causing themselves harm, while hand-reared wildlife can unexpectedly cause harm to people.”

The close proximity of an ever-evolving wildlife population on the estate was a key motivation to live there, Stroebel said.

“When you get close to nature or wildlife it actually does something to your soul,” he said.

“If you sit in the office every day and you’re totally removed from the environment then something dies within you. The moment you are involved with nature it is almost like a tonic for your well-being.

“Many of the people on the estate are or were executives or businessmen who were used to working in a concrete jungle. They are the ones who are normally attracted to the wildlife in that safe and secure setting.”

Stroebel, from East London, added that from a development, layout and infrastructural viewpoint the impression he got after visiting the estate four years later was “extremely positive”.

“If I were to stay in Port Elizabeth the estate would be the number one option on my list, that’s for sure. 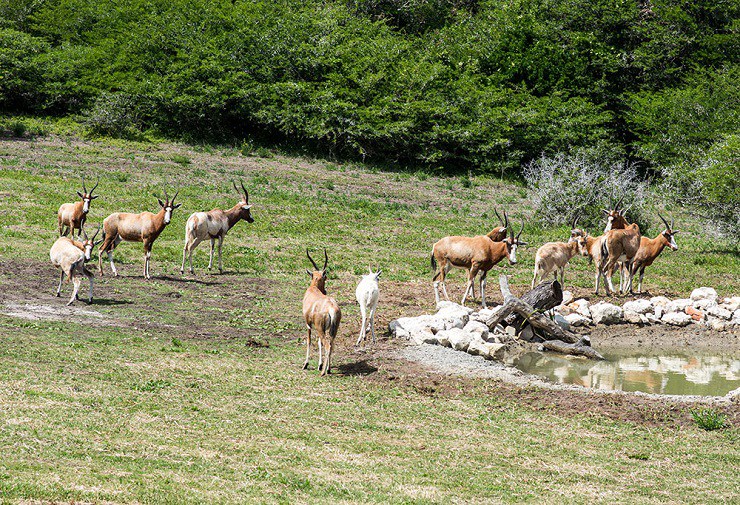 Wildlife conservation consultant Wallie Stroebel was “highly impressed” with what he saw during his most recent assessment of the Sardinia Bay Golf & Wildlife Estate. Photo: Full Stop Communications