University of Johannesburg soccer star Thato Letsose believes she is reaping the dividends after consistent hard work saw her named the varsity’s Sportswoman of the Year this month.

The 22-year-old sport psychology student, who made her debut for the South African women’s team this year, has enjoyed a stellar season on the soccer field.

Besides playing for Banyana Banyana, she captained the UJ team to victory in the University Sport South Africa tournament in Port Elizabeth in July and led the Ussa squad to the gold medal in the Confederation of University and College Sports Association Games in June.

Further recognition came with her nomination as Sportswoman of the Year when UJ held their annual gala sports awards function at Randpark Golf Club on October 11.

Born in Bloemfontein, but now living in Auckland Park in Johannesburg, Letsose said the award meant a great deal to her.

“I feel that finally my hard work is being rewarded,” she said. “This award is a big deal for me because it shows that women’s football is evolving and getting better.”

She admitted that failing to achieve goals she set herself was a big motivating factor.

“The more I fail, the more I want to try again until I master it,” she said. “That, I feel, has been a big part of my success.

“But I must add that nothing would have been achieved without my team-mates. They were always there for me and that made me a better player and a better leader.”

As with many of South Africa’s soccer stars, Letsose learnt about the game playing football in the streets of her community.

“I remember getting involved at a very young age – about six or seven – when I started playing street football with my brother,” she recalled.

“I love soccer because of the excitement of winning and the great team and work skills you develop.

“For me, though, it’s not always about winning. It’s about learning to give your best and encouraging your teammates to do the same.”

She added that meeting new people and developing strong friendships were among the many benefits of the game.

“Sport isn’t just about the fitness, it’s also about the fun you have and the teamwork you build while getting some very healthy exercise.”

Letsose said her three years at UJ had helped to develop her game on a number of levels.

“Being at the varsity has taught me a lot in terms of modifying my skills, as well as learning to master a number of different positions.

“It has improved my leadership skills a great deal, making me into a better captain.”

The UJ skipper acknowledged the contributions made by her coach, Jabulile Baloyi, and vice-captain Potso Aphane.

“Jabu has played a major role in turning me into the player I am today and my vice-captain did a very capable job of holding the fort when I was not available.” 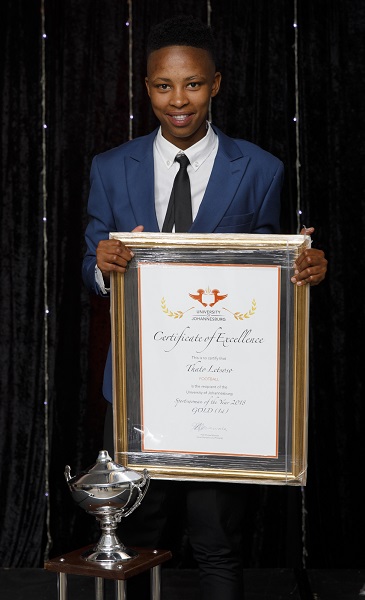 University of Johannesburg women’s soccer captain Thato Letsose was delighted to be named Sportswoman of the Year at the varsity’s annual gala awards function at Randpark Golf Club in Johannesburg this month. Picture: Clive Hassall Photography