The SPAR Wheelchair Wednesday campaign seems to be getting its message across as it continues to raise awareness about the challenges faced by people with physical disabilities.

A joint initiative by SPAR Eastern Cape and the Association for Persons with Physical Disabilities (APD), the campaign has been run every August since 2011.

The aim is to motivate local business and community leaders to spend four hours in a wheelchair on Wednesdays in August and to carry out basic everyday tasks.

APD chief executive Brian Bezuidenhout said in so doing they wanted to increase awareness and, as a result, see improvements made in matters affecting mobility-impaired people.

A total of 1 300 Nelson Mandela Bay residents have experienced spending four hours in a wheelchair since 2011 and Bezuidenhout said there had been some encouraging feedback.

Last week it was the turn of Linton Grange SPAR owner Brett Muzzell to spend further time in a wheelchair, having first participated in the inaugural 2011 campaign.

“The experience of spending time in a wheelchair is always a humbling one,” said Muzzell.

“You gain a true perspective of the challenges faced by physically disabled people just to complete everyday ‘normal’ tasks.

“Nothing is easily accomplished and patience is the key. Every task takes that much longer to complete.”

Muzzell was able to compare his experiences last week with those he encountered during the 2011 campaign.

“Retrospectively, compared to my first four hours in a wheelchair, it appears that things have generally improved within our city,” he said.

“There seems to be a better awareness of the needs of people with disabilities.”

He paid tribute to the APD team for getting their message across and encouraging people and organisations to be more aware of the “challenges and requirements necessary to assist the physically disabled”.

Bezuidenhout said the the participants of Wheelchair Wednesday did far more than just spend four hours in a wheelchair.

“The observations we have received over the seven years of the project’s existence has resulted in some serious changes in both structural and attitudinal matters,” he said.

“Brett Muzzell’s ongoing passion for the cause we represent goes a long way to changing lives.”

International JTI representatives Pat Mostert and Lucius Charles were among the volunteers for a second year yesterday, beginning their assignments at the Mount Pleasant SUPERSPAR.

Mostert said they were again amazed at the challenges they faced, but were also happy to report that there had been some improvements.

“For instance going to the post office was a breeze and very positive,” Pat Mostert said.

“We also found the staff in shops most helpful in difficult situations because it’s impossible to get to products on the third or fourth shelves.

“However, we did find toilets in some shopping malls impossible to access, so that is obviously something which needs attention.”

She added that it was an eye-opening experience to again realise just how difficult actions such as getting in and out of cars were for people with disabilities.

Through her company, where she is an e-sales assistant, Mostert said they were aware of the challenges as they had a philanthropy policy with the APD.

“We work with the adult centre at APD PE to provide support for the people there in any way we can,” she said.

“It helps us to understand the issues they face on a daily basis.”

Wheelchair Wednesday takes place on all the Wednesdays in August and Brian Bezuidenhout can be contacted at 041-4845426 or brian.bezuidenhout@apdnmb.org.za for further information. 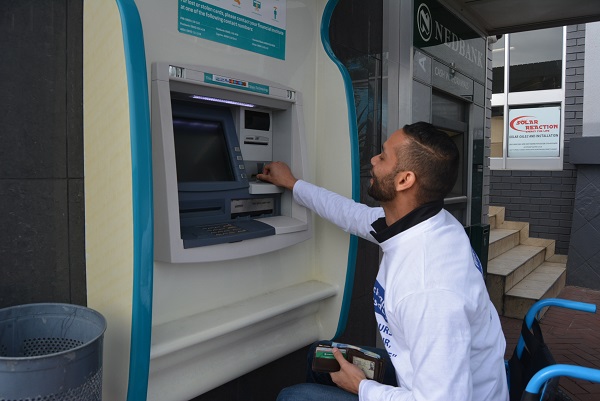 JTI area manager Lucius Charles tackles the challenge of doing an ATM withdrawal yesterday at the start of four hours in a wheelchair in the SPAR Eastern Cape Wheelchair Wednesday campaign, which raises awareness about the challenges people with physical disabilities face. Picture: Full Stop Communications