The SPAR Madibaz team are determined to put on a display worthy of the occasion when the Varsity Netball tournament kicks off in Port Elizabeth next weekend.

Nelson Mandela University will be one of the hosts of a bumper weekend as the tournament launches with four matches on August 26 and 27 at the Madibaz Indoor Sports Centre, South Campus.

Besides the Madibaz team, local fans will be able to see sides from Stellenbosch, University of Western Cape and Vaal University of Technology in action.

Madibaz Sport Netball manager Melinda Goosen said they were looking forward to this opportunity to showcase not only their netball prowess, but also what the university had to offer.

The matches on the Sunday (August 26) will be televised live.

“Not only will there be home-ground advantage, but there will also be the fact of having home support,” she said.

“It is always great to bring netball closer to our fans and this is a perfect opportunity to showcase our players and their talents to our immediate community, as well as to the greater community of Nelson Mandela Bay.”

She added that a lot of work went into hosting a weekend of this nature and it was a significant occasion for Mandela University.

“Playing at home means we can show the rest of the country our beautiful university and what it has to offer.

“Varsity netball, as a competition, has grown its viewership over the past years and so it is important to demonstrate that we are a university of choice in South Africa.”

Goosen added that the double-header of matches would provide a chance for local netball fans to see many top players in action.

“Netball is very popular in Nelson Mandela Bay and we are privileged to have great talent in our local team.

“In addition, you can watch the top student players in the country go head to head in clashes that will set the tone for the rest of the tournament.

“We would love to see strong support for the Madibaz team to help them reach new heights in the competition.”

She felt Varsity Netball was the perfect platform for any young player with aspirations to go far in the sport.

“The world is taking note of South African netball and many Protea players have come through Varsity Netball to achieve greater success in the sport,” said Goosen.

“We have our very own Zanele Vimbela, who played for Madibaz and is now competing in the English premier league.”

Playing a key role behind the development of Madibaz netball are team sponsors SPAR Eastern Cape, to whom Goosen paid tribute for their support.

“SPAR have been involved with Madibaz netball for many years now and we are privileged to be associated with such a dynamic brand,” she said.

“Although Varsity Netball is the highlight of the season, the players have a demanding netball schedule throughout the year, beginning their training in January.

“The significance of having sponsors such as SPAR does not only apply to netball on the court, but also in preparing them for many different skills.

“Having the financial support makes it possible for us to provide opportunities for our players to venture into different areas such as coaching, umpiring or qualifying as technical officials.

“This is crucial as one day these will be the players who will plough back into the sport they so loved playing in their younger years.” 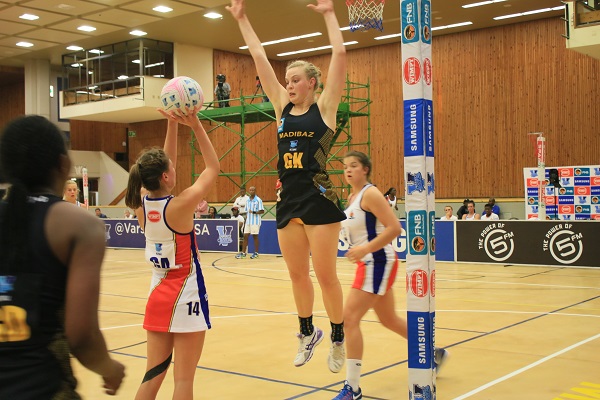 Jeanie Steyn (right) will captain the SPAR Madibaz team when the Varsity Netball tournament begins at the Madibaz Indoor Sport Centre at Nelson Mandela University in Port Elizabeth on August 26. Picture: AM Photography