A strong commitment to an extensive fitness programme has seen the University of Johannesburg team deliver a promising start to the Varsity Football season.

After three rounds UJ are sporting an unbeaten record with two wins and a draw, placing them in second place on the log, two points behind early pace-setters North-West University.

The team registered a significant 2-1 win over Johannesburg rivals Wits on Thursday and UJ soccer manager Joel Kgokong said much of their success was down to their conditioning.

“We have got off to a good start and that’s what we were aiming for,” he said.

“Much of this can be put down to the programme we have in place under one of sports scientists – Sereeta Miles – who has managed the fitness of the players very well.”

He said an indication of this came in the University Sport South Africa tournament, from which they emerged with all their players’ fitness intact

“Maintaining fitness is one of the challenges we have had,” added Kgokong.

“You don’t normally compete in a tournament [such as USSA] where you play seven matches in five days and avoid injuries.

“But that’s what we have managed to achieve and Sereeta has been able to get the players to peak fitness for the next tournament – Varsity Football.

“So that is definitely one of the reasons why we have been able to perform better.”

In addition to that, Kgokong said there was a strong sense of urgency in the camp that this was their chance to take the title.

“We are tired of making the semifinals and sometimes losing in the final [UJ were runners-up in 2016], so there is a real focus on trying to win the tournament this year.

“We have several players with a fair amount of experience because they have been part of Varsity Football since 2014.

“They form the core of the team and understand the dynamics of Varsity Football and what we need to do to make sure we are in with a chance of winning.”

Even though they were among the early frontrunners, Kgokong said they would not be looking further ahead than the next match.

UJ are up against University of KwaZulu-Natal – who won the USSA title earlier this year – in Durban on Thursday.

“For instance, we have always battled against teams like UKZN, who have twice knocked us out of the USSA quarterfinals.

“Now they are battling a bit in Varsity Football [they’ve lost three out of three], but we know you have to take each match as it comes.

“We are not in a rush and do not think we are going to beat everyone else. For each match we have a plan in place and make sure that we come out with at least a point, or preferably three.

“If we can do that, once we reach match five we will be on track to secure a spot in the semifinals.” 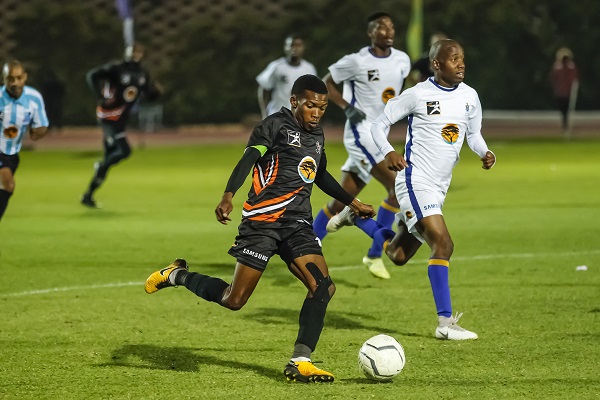 University of Johannesburg’s Mokete Mogaila goes on the attack against Wits in their Varsity Football match at the UJ Soweto campus in Johannesburg on Thursday. Picture: Dominic Barnardt/VarsitySports