Collegiate Girls’ High School became involved with the SPAR Wheelchair Wednesday campaign for the first time yesterday when a number of schoolgirls experienced what people with disabilities face on a daily basis.

The campaign, organised by the Association for Persons with Physical Disabilities, is being held in Nelson Mandela Bay for the seventh year, with volunteers spending four hours in a wheelchair undergoing a number of tasks.

The objectives are to raise awareness about the difficulties those with disabilities face and to generate funds to buy wheelchairs for those in need.

For the first time a school came on board when members of Collegiate’s Interact Society, under the guidance of teacher Carla Grobler, volunteered to spend time in a wheelchair.

“Hopefully, it’s the start of a new dawn of rolling out Wheelchair Wednesday among the schools of Nelson Mandela Bay,” he said.

“This is a chance to open the eyes of our younger members of society to illustrate the difficulties disabled people face. The earlier we can educate them about the challenges, the better for all.”

Grobler said the Interact Society, under President Jancke Blume, had embraced the challenge, as it has done with many community projects throughout the year.

“This is a chance for the girls to become aware of the issues at stake and to give back to the community,” she said.

“In addition, for some of the girls it’s an opportunity to experience in real time the problems people with disabilities face on a daily basis.”

It turned out to be an enlightening experience for all concerned.

Titi said the assignment gave her first-hand experience of how many daily tasks she takes for granted are not easy for those in wheelchairs.

“It was really good to be taken out of my comfort zone and to experience what people with disabilities face,” she said.

“I was immediately aware of how things which are simple for me are much more difficult for people in wheelchairs.

“It has also made me realise that there are some places people can’t access because of their disabilities.”

She added that there were a number of uncomfortable situations that she had had to confront.

“For example, the stares and looks I received from some people, as well as routine acts such as getting a product from a high shelf and getting in and out of a car.

“Also, I had to plan ahead as to which coffee shop I would go to, because certain coffee shops or centres that they are in are not wheelchair-friendly.”

Besides those low points, Titi said it had been extremely worthwhile to be part of something which had such a big impact.

“It really was good to be among a group of volunteers who were doing something positive to raise awareness of what people with disabilities face. So that was an overall highlight for me.”

The Interact Society has raised R5 500 to buy a wheelchair which will be donated to APD when the annual handover function is held on September 26. 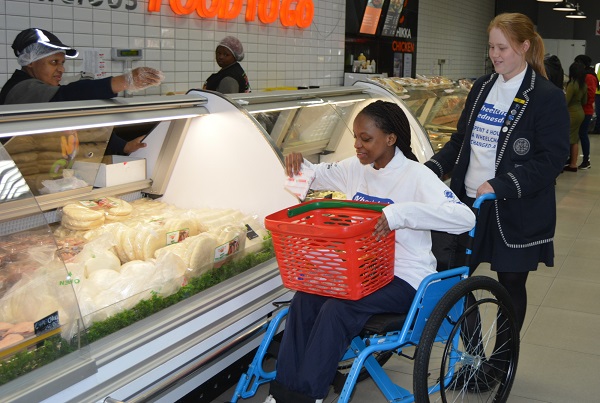