University of Johannesburg student Mzwandile Sotsaka achieved the greatest moment of his rowing career thus far when he claimed a bronze medal at the FISU World University Championships in China this month.

The 22-year-old Sotsaka, who is in his final year of a BSc maths degree, said the medal was reward for the hard work they had put in this year.

“Excitement was definitely the dominant feeling once we had crossed the finish line,” he said.

“After a tough season of training, winning a medal shows that it was all worth it.”

He added it had been “without a doubt my proudest achievement”.

“Standing on the podium of a world event is every sportsman’s dream and I am privileged enough to have done it.”

Sotsaka, from Hatfield in Pretoria, said it was often difficult to know what to expect going into an event such as the FISU World University Rowing Championships.

“Some years you find yourself up against some very experienced senior crews, and other years you’ll race against top-end U23 rowers.

“I was expecting high-calibre competition and that was exactly what we got. Fortunately, we were well prepared for the racing.”

He added that there were several hurdles to surmount on an occasion such as this, not least of them getting used to different meal options.

“However the heat and humidity was certainly the biggest challenge.

“I had to constantly ensure I was well hydrated, otherwise it would have been really tough to compete at a high level.”

The UJ rower said his partnership with Betts, of Rhodes, was a crucial part of their success.

“Brad is an extremely intelligent person, both on and off the water, and he and I clicked immediately when we were paired together in the double.

“Having him as my bowman [the rower closest to the bow who controls the boat] brought me great confidence.

“He is sure of himself and always made the right calls to get the boat going quicker, which is why he has been so successful at rowing.”

Sotsaka, who grew up in Watermeyer in Pretoria, said he was influenced to take up rowing by his older brother.

“Katlego, who has always been a great mentor for me, started rowing at school around 2008 and he convinced me to join him,” he said.

“I decided to go ahead with it and it has been one of the best decisions I’ve ever made.”

He added that he had had many mentors who had helped him succeed in rowing, but paid a special tribute to Mpumi Geza.

“I will always be indebted to Mpumi, who coached me to my first international medal – he is the unsung hero in South African rowing.

“I’d like to add that I am really grateful for all the support UJ have provided over the years. I would not have been able to do it without them.”

The next step, Sotsaka said, was to try to break into the senior national team.

“In the long-term, the goal is to qualify for the Olympic Games and perhaps box for a medal there, too.” 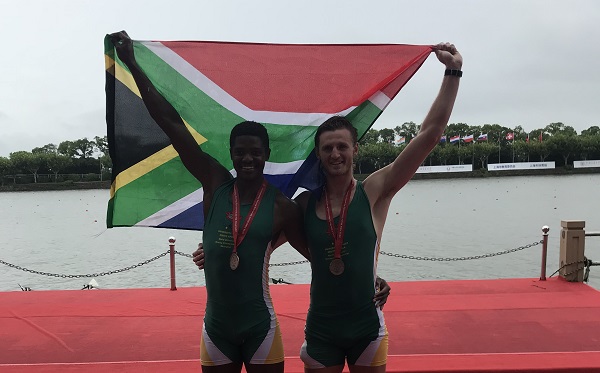