Held on Mandela Day in a banqueting room in City Hall, the occasion allowed those in need to enjoy a sit-down meal of chicken stew and vegetables in comfortable surroundings, followed by cupcakes for dessert.

In addition, the Mayor’s Office had a boerewors braai on the patio surrounding City Hall to supplement the meal.

This partnership formed part of the annual City Feed campaign, which has been a joint-effort by SPAR EC and Nelson Mandela Bay charity organisation Love Story over the past two years.

Love Story founder Elaine Watson said they had been preparing for their annual City Feed on Mandela Day when they traditionally fed up to 300 homeless people in the city centre to commemorate the special occasion.

“This year, the Mayor’s Office were pursuing a similar project and a discussion with SPAR Eastern Cape resulted in a partnership between all three parties,” she said.

“The difference this time is that the Mayor’s Office have provided facilities in City Hall for a sit-down meal for 200 people.

“Initially the idea was to generate meals for 100 people to coincide with the centenary of Madiba’s birth, but such is the demand that we eventually settled on 200 people.”

Love Story regularly feed up to 300 homeless people five times a week, just one of the initiatives the organisation have set up in the city since being formed in 2012 to help the needy.

Speaking ahead of the event, Watson said Love Story would be preparing the meal at their headquarters, with ingredients provided by SPAR EC.

“We usually have about 200 at our daily feeding schemes in the evening, but when we hold special occasions such as this you can expect to cater for up to 300 people,” she added.

“As there is only seating space for 200 people in City Hall, we will also be providing pre-made-up takeaway meals for any latecomers or for those who may not get a seat in the banqueting room.”

Nelson Mandela Bay mayor Athol Trollip said they were thrilled to be involved with this partnership.

“Mandela Day is all about people doing extraordinary things for those in need to continue the legacy of our legendary late president,” said Trollip.

“With the City Feed we have set up this year we want to give back to many of the homeless their dignity by inviting 200 of them to be part of the luncheon and to show that someone cares for them as well.

“Love Story and SPAR Eastern Cape have done incredible things in our city and this is a wonderful opportunity to be involved with their efforts to give something back to the community.”

SPAR EC sponsorship and events manager Alan Stapleton said it was a special moment on a special day.

“It is truly humbling to see the genuine appreciation of those who have so little, and a privilege to collaborate with the Mayor’s Office and Love Story in a small gesture to give back to the communities,” he said.

“In the words of Nelson Mandela, we should all ‘to try and change our world and make it a better place. It is in our hands to make a difference’.” 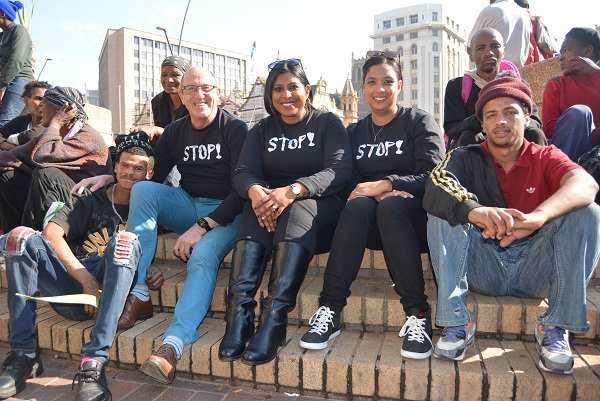