Defending champion Alexa Pienaar is ready to handle what could be a pressure-filled week when the University Sport South Africa squash tournament takes place in Port Elizabeth next month.

The University of Johannesburg visual arts student will be aiming to retain the individual title, while her team will be chasing a remarkable seventh straight triumph at Nelson Mandela University from July 1 to 6.

The 23-year-old won the title for the first time last year after being the 2016 runner-up and knows she will be under pressure from her rivals.

“I have managed to do well at USSA every year and it is kind of expected of me to do well again,” said Pienaar.

“But I am aiming to look past the pressures, both from the outside and from myself, and just play how I know I can. That is what I have prepared for.

“I understand the real test will come on the court and I hope it will be enough for me to potentially make the USSA team again, as well as bringing home the individual title.”

She added there would be plenty of incentive to succeed as student-players would be vying to make the USSA team to compete in the World University Championships in Birmingham, England, in September.

Pienaar, who won the Prince Grand Prix at Parkview in Johannesburg and North West Closed tournaments in March, said she had included more solo sessions in her programme this year “as it builds the basis of skills training and helps with confidence in your shots”.

“I am also trying to include a more aggressive game-plan, getting onto the ball quicker and applying more pressure.

“I feel I have physically reached a higher level than I ever have before and it now boils down to being able to assert my skills on court.”

She felt there would be equal pressure in the team competition after UJ’s six title wins in a row, but was confident they could do well again after their intensive preparations.

“Everyone in the team has improved from last year and we are stronger than ever.

“We have been doing some heavy training since the start of the year.

“Our focus was to build on a solid fitness foundation and then work towards a more focused [skill and power-based] training routine as the bigger tournaments of the year started approaching.”

She said they realised that playing at the coast compared to the highveld altitude could make a difference.

“The ball moves a little slower and bounces less, but we are planning to have one or two training sessions before starting our matches.

“We all have experience in this as well, so we know more or less what to expect and how to deal with the changes.” 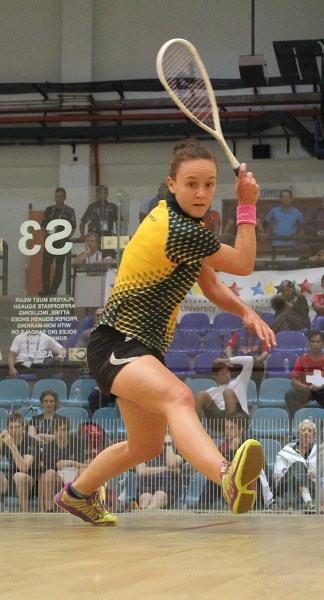