University of Johannesburg’s Kristen Paton has been pinching herself as her hockey career continues to progress.

Paton, who played in the Commonwealth Games earlier this year, has now been included in the South African team to play in the World Cup tournament that starts in London on July 21.

“I have to keep reminding myself that everything that happened this year was actually real,” said the 21-year-old chiropractic student.

“Less than a year ago I wasn’t even considered as part of the national team. To have a Commonwealth Games and soon a World Cup behind my name just eight months down the line is an incredible feeling.”

Despite receiving the vote of confidence from the national selectors, she said she never felt sure of being selected.

“There are always nerves. Every time a team is announced, it’s a massive relief when you do get the call.”

Paton said she had learned a great deal from the Commonwealth Games in Australia where she experienced a range of emotions, from nerve-racking to sheer excitement, when she competed against some of the world’s top players.

“I loved being able to measure myself against some of the best players in the world.

“It’s easy to be a critic from your couch but when you physically play against top players, you quickly realise how difficult international hockey is,” she said this week.

“It was a massive learning curve for me and I realised just how much more work I had to do to be able to compete.

“You need to adapt and you need to do it quickly, otherwise teams will punish you. That was a great challenge for us.”

International hockey required of players to be effective on attack, she added.

“You don’t necessarily need most of the possession, but you must be able to convert your opportunities and apply scoreboard pressure.

“You can only defend for so long before you concede goals, so you must be able to shift the momentum. Learning to deal with pressure, both mental and physical, is also a major factor.”

Paton and her teammates in the national squad are now preparing to put those lessons into use at the World Cup, which she feels will be a much tougher environment.

“I obviously cannot speak from experience, but I think the World Cup, compared to the Commonwealth Games, is like chalk and cheese.

“The standard of hockey increases tenfold. This means your basic skills, technical ability and fitness must be better.

“Your ability to execute game plans is critical and any mistake is punished, so attention to detail is very important,” Paton added.

The team will prepare for the World Cup tournament during a 15-day training camp in the Netherlands before heading to London for final preparations. 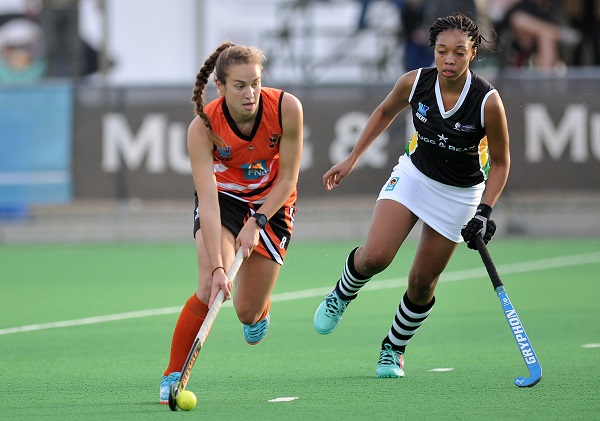 University of Johannesburg player Kristen Paton is delighted to be in the South African hockey squad to compete in the World Cup tournament, which starts in London on July 21. Picture: Saspa