HB Kruger and Regis Maniora won their third stage in a row to seal overall victory in the Liberty Waterberg MTB Encounter near Bela-Bela in Limpopo today.

In the final stage, which culminated at the Sondela Nature Reserve after 59km of racing, the ASG-Cape Duo pair took a hard-fought three-second victory over ASG Store Paarl’s Hanco Kachelhoffer and Pieter Seyffert, who secured the runner-up spot in the general classification.

Kruger and his makeshift Luxembourg teammate clinched the top spot with an overall time of 6:50:18, a minute ahead of their closest rivals.

Kruger, who is based in Paarl, was delighted with their victory in his second appearance in the Waterberg Encounter, presented by STANLIB.

“It was a good feeling to win,” he said, admitting that he was more relaxed than during his debut.

“From my experience last year, I knew it would be an enjoyable race with a good vibe and I was looking forward to another challenging weekend.

“To take the victory added that little bit extra – it was the cherry on top.”

Kruger said he and Maniora were pushed hard on the final day after a less than perfect start.

“Earlier in the stage my teammate had a bit of a tumble, which put us on the back foot slightly.

“We were about a minute-and-a-half behind Hanco and Pieter and had to chase hard.

“Luckily we eventually caught up and were strong enough to stay with and then beat them in the sprint.”

Kruger, who won the TransCape MTB Encounter alongside Stuart Marais in February before crashing out on the final day of the Winelands MTB Encounter in April, said he and Maniora had “good chemistry” on and off the bike.

The 27-year-old said he had enjoyed the sense of camaraderie at the event as a whole.

“The spectators and organisers were all so friendly and the lunches were quite special.

“Everyone sits around a table and share war stories. That is sort of what mountain biking is about; people from all over coming together and sharing special moments.”

The Liberty Waterberg MTB Encounter catered for every type of cyclist, Kruger added.

“I would recommend it to everyone from weekend warriors to competitive racers.”

Gerhard Strydom and Estelle Barbara Gous were equally undefeated over the weekend to win the mixed category in 8:30:26. Oscar and Mireille Koster were second with Richard Hoal and Yvette Roberts third. 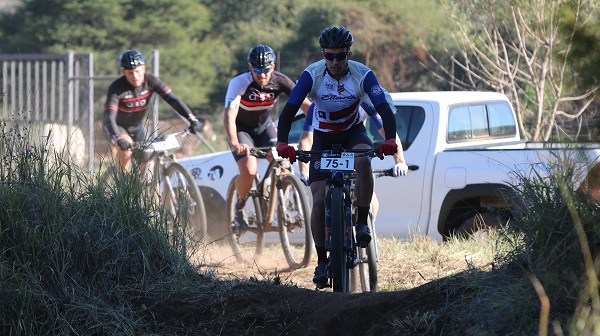