As a central defender with a penchant for attack, Samuel Connelly has emerged as an influential player for the Madibaz football team this season.

Last week, with the competition not yet completed, Madibaz wrapped up the Nelson Mandela Bay SAB Regional League title for the second straight year, giving them another chance to chase promotion to the ABC Motsepe league.

It has been another well-orchestrated team effort in which 20-year-old Connelly’s consistency as a player and his dedication in training have stood out.

“In Samuel we have a modern-day centre back who consistently turns defence into attack and has a really bright future,” said Madibaz Sport Football manager Mark Tommy of the second-year public administration student.

The 20-year-old, himself, was over the moon with the team’s success this season.

“Wow! It’s an incredible feeling,” he said. “It’s like when you’re hungry, and you order four wings, but they give you six – that’s the exhilaration I felt when we won the SAB league.

“To do it two years in a row is definitely something to tick off on the bucket list, but we know that the hard work begins now.”

Connelly was referring to their bid for promotion to the ABC Motsepe League, the play-offs for which take place next month.

He feels the experience from last year, when they missed out on promotion, will stand them in good stead.

“We have a great bond in the team and we are hungry to learn more. For me, the team is full of role models.

“Most of us experienced the play-offs last year and we know what to expect and how to conquer this challenge. I have full confidence that we will qualify for ABC Motsepe this year.”

Having grown up in Schauderville in Port Elizabeth’s northern areas, Connelly attended Abraham Levy Primary before matriculating from Cillie High in 2016, where he was the head boy.

He said he started playing soccer at the age of seven and joined Hotspurs when he was 11.

“I still remember how I would train with all my soccer gear on, including long socks and shin guards,” he said.

“I was lucky enough to win a number of awards throughout my soccer career and also to be in leadership positions.

“But for me, it’s really not about the title. It’s more about contributing your leadership skills to the team to help them succeed.”

He recalls an important educational development in his career when he received an opportunity to tour Holland, Spain and Germany.

“I learnt a lot from other coaches outside South Africa,” said Connelly.

“Another highlight was when I got called up to the Madibaz team to represent the university squad in all competitions.”

While he has received praise for his performances this season, the Madibaz player said he would never relax in the quest for success.

“I am a player who believes there’s always room for improvement and I still ask my coaches where I can improve.

“I definitely think my height [1.96m] is a big asset and I try not just to play the game, but I try outwit my opponents.

“The ability to listen to my coach’s instructions is also a strength. They can tell me one thing and not have any reason to touch that topic again.”

In praising a number of coaches who have influenced his career, Connelly also acknowledged his family, who have always been there in support.

“They would always make plans to watch me and it’s these small things that helped me develop into the player that I am today.

“I would like to thank God. I believe God gave me this gift and what I do with it is my gift back to Him.”

“He has not just been a manager, but a mentor and father figure in my life.

“He would always text me or pop in to check on me and I will always be very grateful for that.” 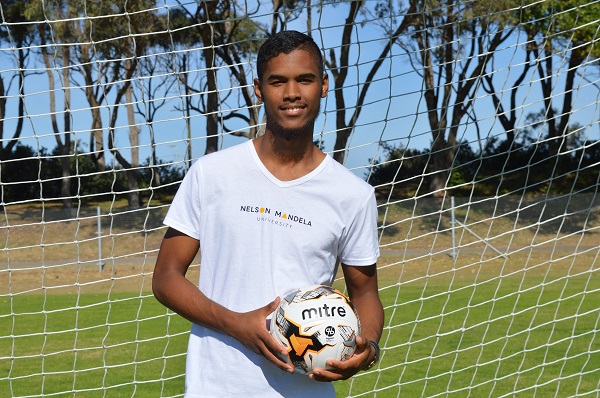