As two-time defending champions, the University of Johannesburg men’s team know the pressure will be on them when they begin their campaign in the Varsity Hockey tournament next weekend.

UJ hockey manager Elize le Roux said they would not be getting ahead of themselves and would focus on each game as it happened.

After the women held centre stage in 2017, the men’s version of the competition will take place this year, beginning with a round of four matches at Wits in Johannesburg from May 4 to 7.

UJ have lost a number of experienced players, including Gareth Heyns, Brynn Cleak and Taylor Dart, from the winning team of 2016 and have entered a rebuilding phase.

Le Roux said several players had graduated or were past the eligible age of 25, but that the youngsters available added a fresh element to the squad.

“We are taking a new view into this tournament as we have a young team during this rebuilding period,” she said.

“Naturally, we would love to defend the title, but we are taking it game by game at this stage.”

As the title-holders, she added that there would always be pressure to perform, but they were trying keep the players focused on their plan rather than be influenced by any external expectations.

Under coach Garreth Ewing, the squad have been training for over two months in their preparations.

“Holidays and league fixtures have interrupted a couple of sessions, but we have also used league as part of our preparation,” said Le Roux.

“We have a mini camp planned this long weekend ahead of the competition next week.”

As usual in varsity events of this nature there are a number of innovations which will test the teams.

“I think the men like the format. It gives running hockey a chance to be seen and the men play a faster-paced game in general.

“The power play and the goals systems mean you face the challenge of managing each game in a different way, according to the opposition.”

The power-play rule can be taken by one side at any stage of the game.

The side choosing to initiate the power play force the opposition to remove two players from the field for a short period. Any goal scored during the power play counts for two goals.

Le Roux said their efforts would depend on the entire team, which included two talented goalkeepers in Matt Martins and Gary Cooper.

“Kyle Lion-Cachet, who is captain, and Courtney Halle are SA U21 players, while we will also draw from the talent and experience of Chad Burke and Dylan Swanepoel in our link line and SA U18 players Che February and Spencer Botes.” 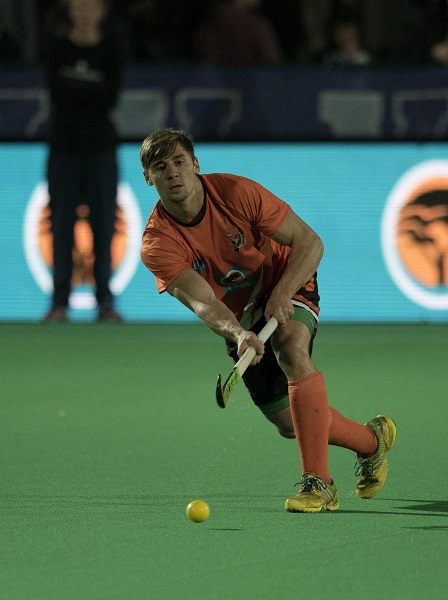 Kyle Lion-Cachet will captain the University of Johannesburg team in the Varsity Hockey tournament, which gets under way at Wits in Johannesburg on May 4. Picture: Catherine Kotze/Saspa