Given his legendary status, it is not surprising that Jamaican athlete Usain Bolt was the inspiration for rising Nelson Mandela University sprinter Luxolo Adams to take up the sport.

Born in Burgersdorp in the Eastern Cape, the 21-year-old Bestmed Madibaz club member was more interested in soccer before a video of Bolt competing in the 2008 Olympics made him change track.

This has resulted in Adams racing to prominence in South African athletics. He won the 200m title at the national senior championships and beat Anaso Jobodwana in the Athletix Grand Prix meeting in Paarl last month.

Jobodwana, the world championships bronze medallist in 2015, is still one of the country’s top sprinters, but he watched Adams blaze to victory in a personal best of 20.01 seconds.

This might never have happened had Adams, who finished his schooling at Ndzondelelo High and Hill College in Port Elizabeth, not caught a glimpse of Bolt on television a decade ago.

“I was more interested in soccer when I was growing up and I was quite a good goalkeeper at first,” he said this week.

“Later on I became a midfielder and ran non-stop. But then I saw a video of Bolt setting world records in the 100m and 200m at the 2008 Olympics [in Beijing].

“I became so excited because I love sport. So I decided I wanted to do athletics.

“Watching Bolt break those records… I just knew if I focused on athletics I may be able to get somewhere.”

Full of praise for his coach, Gerrie Posthumus, and the Eastern Cape Academy of Sport, who have supported him, Adams said his recent performances had boosted his confidence.

“Being the South African 200m champion has shown me that things I only dreamt about are possible.

“That includes beating a runner like Anaso twice. It’s difficult to put in words what that means to me.”

Adams, determined to prove himself this season, received another confidence boost when he beat American ace Justin Gatlin for third place in the 150m at the Athletix Grand Prix in Pretoria.

“My goals for this year were to prove I can compete with the best in the world, which I have done, and to compete in the Commonwealth Games in Australia.

“Unfortunately I was not considered for the South African team.”

While Bolt remains his role model, Adams is extremely grateful for the support of his mother, Zoleka.

“She has played, and continues to play, a huge role in moulding me,” he said. “She is the best and means everything to me.” 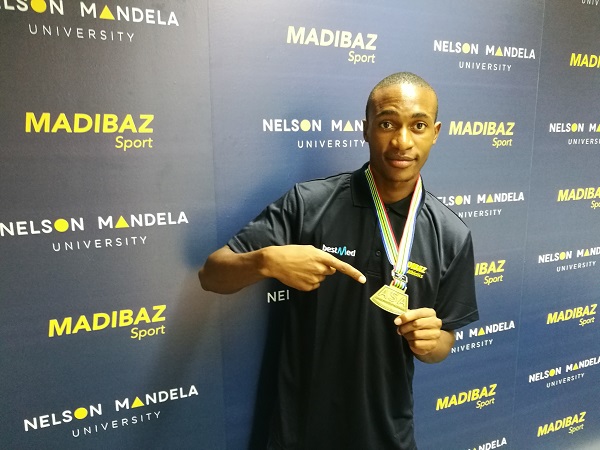