A decision to focus on local clubs proved a masterstroke as it generated an electric atmosphere when the SPAR Nafa Easter Soccer Festival drew to a climax in Port Elizabeth on Monday.

In hosting the 45th edition of the tournament, Heynes said they had decided not to invite out-of-town teams this year, opting to give more local clubs a chance to compete in the popular event.

“The local support for the teams was incredible and this is probably the primary reason for the outstanding spectator involvement over the weekend,” said Heynes.

“In terms of support and atmosphere, this year’s event probably ranks as the best in recent times, making it another huge success.

“The rebranding of the event as a festival was apt because, besides the soccer, the food stalls and entertainment throughout the weekend contributed to a carnival environment.”

Heynes said the decision to continue with the age-group competitions from U10 to U20 was another major boost.

“Parents and families are very important to Nafa and the inclusion of all the junior divisions attracts so much attention.

“The enthusiasm of parents and spectators was clearly reflected in their high level of vocal support. It creates such a buzz and it gives so much value to the entire event.”

The organising body would continue to look at ways of improving the weekend’s offering, he said.

“Next year we will look to include a women’s section and we also want to add more life-skills programmes for the juniors and more coaching clinics.”

Heynes added that there had been a big improvement in the standard of play this year.

“Teams seemed to have moved up a notch as they appeared to be fitter and stronger.

“Although played in windy conditions, the final was a competitive affair between two teams based in close proximity to each other.”

An interesting match-up, he said, was the clash between Park United and defending champions Sibanye in the semifinals.

“Sibanye defeated Park United in the final last year so this year’s winners gained a bit of revenge by taking this clash 2-1.

“This came courtesy of a Sibanye own goal after the teams were deadlocked at 1-1 with only a few minutes remaining.”

Heynes said there was also the unusual occurrence of a place in the quarterfinals being decided by a draw.

“This was all part of the rules where Malabar rivals Shamrocks and Ramblers could not be separated in relation to their points, head-to-head result, goal difference, goals scored and goals against,” he said.

“It was a first in the 45-year history of the tournament, with Ramblers going through after being drawn from a bowl.”

He also mentioned the significant progress made by Stardrift, illustrating the importance of providing opportunities to local clubs.

“They have participated in this event for 25 consecutive years and have never made it to the knockout stages,” he said.

“This year they reached the semifinals in their best performance at the event, so that was really encouraging to see.”

The Nafa official paid tribute to the significant role title sponsors SPAR played in the tournament.

“Their contribution is extremely important and we would not be able to host as successful an event without their support,” he said.

“They are closely involved in all aspects of the tournament and this all adds to the prestige of the whole package.” 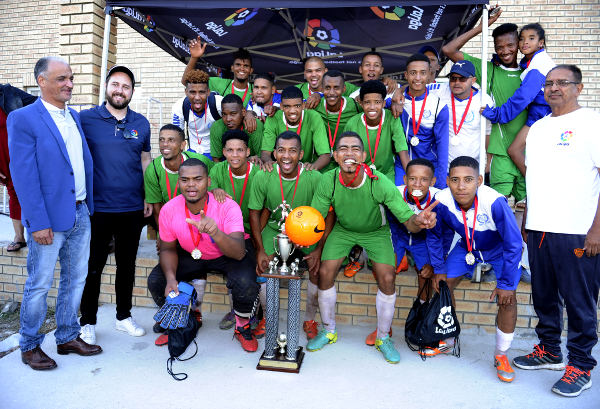