A desire to support a worthy cause and a passion for cycling are behind Optimum Financial Services’ commitment to the Bestmed Cycle4Cansa Championship at Sun City later this year.

Joining the event as presenting sponsor, the Pretoria-based financial company will increase their backing this time, building on the R50 000 donation they made last year.

Cycle4Cansa, which focuses on raising funds for the Cancer Association of South Africa, takes place on August 25 and 26 and incorporates road races and mountain-bike events.

It is one of the longest-running cycling events in the country and will celebrate its 21st anniversary this year.

Optimum Financial Services marketing director Werner Swanepoel, the former Springbok scrumhalf, said they had always been involved with the race but had upped their stake this year.

“For a couple of years there has been an association with the event as one of the smaller sponsors, but we want to show a greater commitment this time,” he said.

“There are a number of keen cyclists in our company, including chief executive Louwrens Smith, and we feel this is a really good cause to support.

“Sadly, Louwrens’s mother died of cancer a while back but during that time he came to understand the incredible job that Cansa do to help those in need and we feel this is a great opportunity to give something back.”

Besides riding in the Cycle4Cansa event, Swanepoel and his colleagues demonstrated their passion for cycling by competing in the Bestmed Tour of Good Hope in the Cape Winelands last month, rated South Africa’s top stage road race.

He added that they wanted to build the company’s brand after opening a branch in Cape Town recently.

“In addition, being in the financial industry it is our business to promote a healthy lifestyle among all our clients.

“Obviously, sports help you to achieve that and that is why we are very keen to get involved in events such as this.”

He said their general modus operandi was to hold a number of functions, “mostly golf days”, from which the money raised would be donated to Cansa at the Sun City event.

In the two decades of its existence, Cycle4Cansa has raised close to R4-million for the national organisation and the support of Optimum Financial Services should help boost that amount this year.

Entries for the event will be limited to 4 000 and due to the 21st anniversary, the field is filling up fast.

For more information, go to www.cansalostcity.co.za. 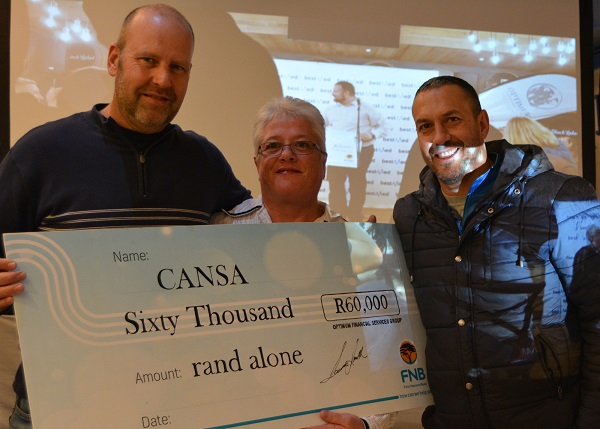