In his last year at varsity, Namibian rugby international Wian Conradie is determined to go out on a high as the Varsity Cup tournament enters its closing stages next week.

The 23-year-old No 8, who is completing a B Tech in quantity surveying this year, was named the Player that Rocks in UJ’s 30-30 draw with UP-Tuks after scoring a try and excelling in general play.

However, his attention is now on the team’s final league match against University of Cape Town, which will be a straight shootout between the sides for a spot in the semifinals.

After failing to close out UP-Tuks when they led 20-7 at halftime, UJ have 23 points with one game to play. UCT are just three points behind them, so whoever wins on Monday should end up in the top four.

Conradie, who played for Namibia in the 2015 World Cup, said he was enjoying his rugby at UJ.

“This is my final year so it’s a make or break game on Monday [in Johannesburg] and I am really keen to go out on a high,” he said.

“We know UCT will be up for the challenge, which is turning out to be a ‘quarterfinal’, but we are really motivated to win that one and to get through.”

He said he was happy to get the recognition as the Player that Rocks.

“I enjoyed Monday’s game, which was quite physical. It’s always a big derby against Tuks and it’s quite testing to play them away from home.

“Things went our way for most of the game, but we let it slip in the last 10 minutes.”

Having grown up in Windhoek, where he attended Windhoek High, Conradie said he would be focused on making the Namibian side once the Varsity Cup was completed.

“Playing in the 2015 World Cup [in England and Wales] was a massive highlight in my career and now we are looking at the 2019 tournament in Japan.

“Namibia have to go through a qualifying tournament in June and if we make it through there, hopefully I can make the team to play in the next World Cup.”

Conradie, who stays on campus at UJ, said he was committed to Namibian rugby, having attended a training camp this month.

“There is another camp in May and if my form stays good, hopefully I’ll have the chance to play in Japan.”

A player with a physical approach who carries the ball strongly, Conradie said there was always room for improvement in his game.

“I am working on stepping up my defensive efforts and to get a bit more physical in that area,” he said.

“I’ve had a lot of help from the coaching staff at UJ and I have really enjoyed my rugby here since 2014.

“I first played in the Varsity Cup squad from the bench in 2015, but have been a regular in the team since 2016. I have learnt a lot in the last three years.” 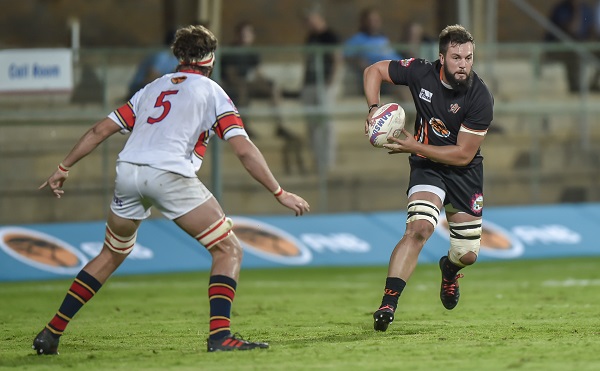 University of Johannesburg No 8 Wian Conradie prepares to pass the ball in their Varsity Cup rugby match against UP-Tuks in Pretoria on Monday. The match ended in a 30-30 draw. Photo: Asem Engage