Sticking together in adversity and fighting hard every week have earned the University of Johannesburg rugby team a spot in the Varsity Cup semifinals against NWU-Pukke next week.

UJ, who were under pressure after two opening losses in the competition, defeated University of Cape Town 18-17 on Monday to finish third on the log, behind Stellenbosch and the Potchefstroom outfit.

This has given them another tilt at Pukke after they suffered a narrow 18-15 loss to the same opponents in Potch last month.

UJ coach Werner Janse van Rensburg praised the team for their ability to fight back in a number of tough situations.

“We faced adversity after those two early defeats and, with a number of injuries, there was a lot of pressure,” he said.

“But the ability to stick together and to fight hard every week helped us to achieve a place in the top four.

“For example, we faced a crucial match against Shimlas [Free State University], but our fighting qualities came through with a good win.”

Following the two early setbacks, he said the team had won five of their remaining six matches and drawn the other.

“We are not the main team on everyone’s lips. Each week there was pressure, but to get three consecutive wins, then a draw, followed by another win, ultimately we will take that.”

Janse van Rensburg added that Monday’s semifinal in Potch would be all about who could handle the pressure on the day.

“It’s also about knowing that you can win it in the 80th minute so you have to be prepared to fight all the way,” said the coach.

“I believe our match against UCT, which was basically a quarterfinal, will have helped us to understand what sort of pressure we will face next week.

“We have reached the semifinals the hard way and this group of players will know how to handle the key moments.”

He felt the match would boil down to doing the basics well and focusing on their own game-plan without worrying too much about the opposition.

“There will be no major out-of-the-box thinking. We have got into a semifinal and it’s mainly about sticking to what works best for us.

“Of course we do need to do the basics properly, but our planning will be all about what we have done well this season.”

Although the nature of knockout matches meant anybody could win, he said there was a sense of belief in the UJ squad.

“After putting yourself through all the training you do in pre-season and all the hard knocks you take along the way, you have to make the most of this opportunity,” said Janse van Rensburg.

“Getting to the play-off matches is what it is all about and having achieved that, you just want to make sure you do the best you can.” 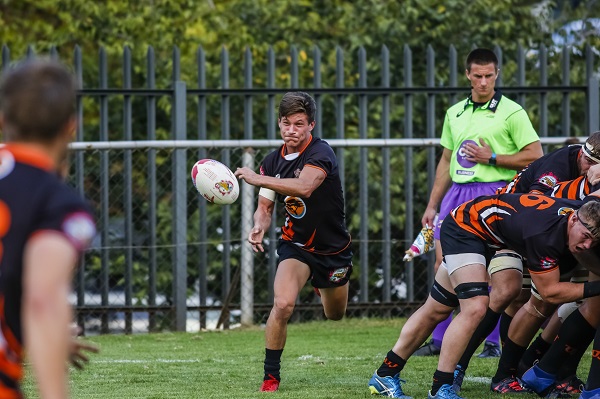 University of Johannesburg scrumhalf Bradley Thain gets his backline away during a Varsity Cup rugby match. UJ defeated UCT in their final league match on Monday to qualify for the semifinals. Photo: Asem Engage