After a near perfect lead-out, Matteo Sobrero timed his sprint to perfection to win the fourth stage of the Bestmed Tour of Good Hope near Paarl in the Cape Winelands today.

The 20-year-old collected the third stage win in a row for the DiData outfit after Stefan de Bod’s time-trial victory on Tuesday and defending champion Kent Main’s effort on Du Toitskloof Pass yesterday.

After 134km of racing, Sobrero dashed home in 3:38:42 to beat Berge en Dale and Ride for Sight champion Reynard Butler (ProTouch) and Clint Hendricks (BCX) to the line.

De Bod retains his tight grip on the yellow jersey as the tour, which boasts an international field, heads into its final day tomorrow.

The 491km race, presented by Scicon and the City of Drakenstein, will culminate with the tough climb to the Taal Monument above Paarl following a relatively flat start to the fifth stage.

The penultimate stage saw several attacks and a few breakaways before inevitably coming down to a sprint, with De Bod playing his part in the final outcome.

The former U23 national road champion explained that a group of three riders got away after the ascent of Bain’s Kloof Pass, about 30km from the finish.

“Kent, Matteo and I then closed the gap but I think Kent spent a few pennies in that period to protect the GC and he dropped off a bit.

“Gustav Basson [of ProTouch] then went full gas because they were trying to get second place in the general classification, but we stayed with them.

“Within the last kilometre, with about 500m to go, I was able to lead out Matteo, taking him into the final corner. From there he was on his own and able to keep the gap until the line.”

The Italian, who will complete his stint of racing in South Africa at the Cape Town Cycle Tour on Sunday, was delighted with the victory.

“This really means a lot to me. It is the first time I have raced here and I have really enjoyed the experience.”

De Bod, the champion in 2016, said their priority in tomorrow’s 82km stage would be to protect the yellow jersey.

“Because we have won the last three stages, there are going to be a lot of teams wanting to take something from the race. So I expect there will be plenty of attacks.

“We will definitely look for another stage win, but mostly it will be important for me not to lose any significant time in the GC.”

Ariane Luthi (Spur) shrugged off an early mechanical to sprint to her third stage win in a row in the women’s race.

Her efforts over the last three days have placed her in prime position to take the title for the second time tomorrow. She provisionally leads Lucy James by about three minutes in the overall standings.

Luthi’s lead was in the balance for a while when she suffered a mechanical – a snapped cable severely limiting her gearing – following the descent of Du Toitskloof Pass early in the stage.

“After I realised what the problem was and worked out what I had to do, I had to chase back to the pack. But they were very fair and did not attack me at that stage.”

She said the breakaway eventually formed on Bain’s Kloof.

“Just over the top Catherine Colyn went to the front and I managed to take her wheel as we went hard downhill. That caused quite a bit of damage.

“Carmen and Lucy [James] were able to stay with us and from there we were all committed and put in a lot of effort to create a gap of just over three minutes.”

Luthi said she used her cornering technique from mountain biking to surge to the front around the final bend and was able to hang on for a fine victory. 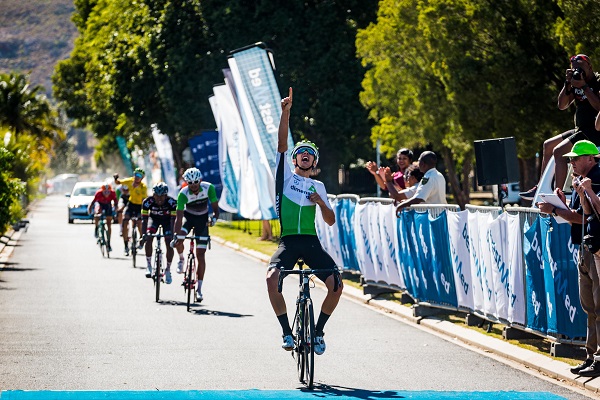 Italian Matteo Sobrero of the DiData Continental team celebrates his victory on the 134km fourth stage of the Bestmed Tour of Good Hope, presented by Scicon and the City of Drakenstein, which ended near Paarl in the Cape Winelands today. Photo: Robert Ward