After a dominant week, South Africans HB Kruger and Stuart Marais were crowned overall winners of the Liberty TransCape MTB Encounter in Franschhoek in the Western Cape today.

The ASG-Ellsworth pair set the pace in the UCI Men’s category from the start of the 73km final stage between Houwhoek and La Couronne Wine Estate to add a sixth stage victory to their tally.

Kruger and Marais took the lead on the opening day and never looked back as they went about their business – completing the seven-day race in 19:32:36.

In their debut in the race, they finished comfortably ahead of Eirik Fiskvik and Thomas Engelsgjerd of Norway (20:19:02) and Marecaille and Biefang (20:44:00).

The Paarl-based Kruger said claiming the title in the 614km race was immensely satisfying.

“We came in with the big goal to win the race so we were very happy with the way it turned out,” he said. “Getting the stage wins were a bonus.

“Luckily Stuart and I clicked well. We got a good partnership going and we really enjoyed riding together.”

Kruger said the block of riding in the TransCape, which is supported by STANLIB and Volvo Cars, had fitted in perfectly with his programme for the year.

“There’s a different dynamic to the TransCape because it gives you an excellent test while preparing you for the other big events.”

He said he would be competing in two road races – the Bestmed Tour of Good Hope and Cape Town Cycle Tour – before heading to the Cape Epic, all of which take place in March.

Marais, from Howick in KwaZulu-Natal, explained they had decided to go hard from the start of the ultimate stage, which set up their win.

“There was quite a lot of single-track and I went to the front from the beginning because I didn’t want to get stuck behind on that section,” he said.

“Actually, the single-track section was a bit further into the stage than I thought, but the three main teams did manage to break away.

“Up a climb one of the Norwegian guys was not feeling great, so they dropped off.

“We rode with the French-German team and after the first water point HB went to the front and we managed to get away from them.”

Marais, who concentrates on cross country racing, said he was now well set for the UCI Mountain Bike World Cup in Stellenbosch in March.

“I am trying to peak for the World Cup. I’m looking forward to recovering from this and then to get in some speed work.”

Germany’s Udo Mueller said he had “a fantastic week” as he, too, led from the start to secure the solo men’s title in 21:13:06.

The mixed category was dominated by British star Catherine Williams – who successfully defended her title – and Belgian’s Kristof de Neys for an overall time of 22:31:42. 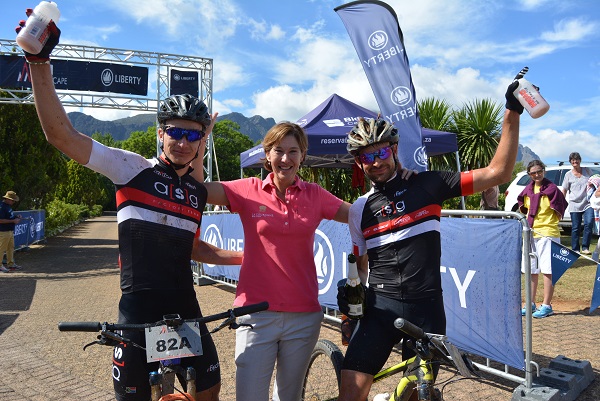