An astute rotation of players in the early part of the year has given the Madibaz football team a chance to retain their SAB League title in Port Elizabeth.

With the Nelson Mandela University term starting only in early February, Madibaz often face a challenge because the league resumes almost a month earlier when they are not at full strength.

However, Madibaz football manager Mark Tommy said careful management of their resources had enabled them to return to the top of the SAB League log.

“One of our strategies is to optimise the squad through rotational player management in games and training,” he said.

“This creates an ability in the local-based players to deal with the competition demands when the out-of-town student athletes have not yet returned to campus.”

Coach Wayne Iveson added that the senior players had also stepped up to the plate during this period.

“They took the responsibility to guide the younger players in terms of our processes and to provide ongoing motivation to improve,” he said.

“More emphasis was placed on the tactical and technical workload with the ball, thus improving the physical demands needed.”

Tommy said it was satisfying to return to the top of the log at this stage of the season.

“With the resumption of lectures on February 5 most of the players returned to campus and they were excited that the team withstood the challenges during the January period.”

He added that the Madibaz football philosophy was based on the team and not the individual.

“It is just this unity that carries the team when the chips are down. It cements the team through their desire and winning attitude.

“Heading the log underlines the quality of this team and ticks all the boxes that our technical staff, under the astute guidance of Wayne Iveson, have in place to put the team on the correct path.”

While they would continue to respect their opponents and knew there were no guarantees, Tommy said they were confident going forward.

“Having done it before we believe the winning culture and experience will keep us going.”

Iveson said the league was scheduled to finish in May, with Morning Stars looking to be their toughest opposition.

“But having said that, all matches are important and it is vital to take points off the teams near the top to prevent them from climbing up the standings.”

He added that he felt the squad had better depth and greater unification than previously.

“The older players are highly functional and the process to get the youngsters to the required level is ongoing.”

Madibaz will continue their campaign with an away fixture against Amarhamba United tomorrow. 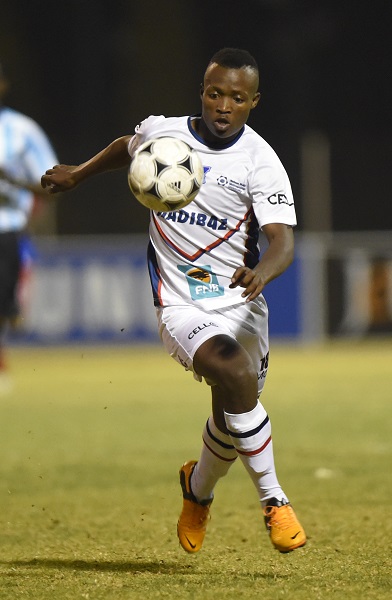 Simamkele Thobi has played an important role in the Madibaz football team to help them return to the top of the standings in the SAB League.  Photo: Saspa