After a remarkable performance in the Paarl Boxing Day track event, ace mountain biker HB Kruger will return to more familiar pursuits when he competes in the Liberty TransCape MTB Encounter this weekend.

Starting in Knysna on Sunday, the 614km race, supported by STANLIB and Volvo, will see riders tackle the seven-stage mountain bike race through the Western Cape, finishing in Franschhoek on February 10.

The 26-year-old Kruger stunned many cycling pundits, including himself he said, when he won the feature 25-mile track event in Paarl on December 26.

Now he will join new partner Stuart Marais of Durban to make his debut in the TransCape. He hopes to continue his rich vein of form in his second race of the year.

Riding for ASG-Ellsworth, Kruger said he and Marais were positive about their form as they contemplated criss-crossing the many iconic trails comprising the race route.

“At the moment my training has been going really well,” said Kruger, who took top spot in the Liberty Winelands Encounter last year.

“This past weekend I did a race near Paarl, the TransBreede Ultra, and I finished on the podium.

“It was my first race of the season and that is always a bit of a shock to the body. But my form is good and I am motivated and positive about the TransCape.”

Having raced in the Knysna Oyster Festival, as well as many trails in the second half of the TransCape route, Kruger, who is from Paarl, said he was reasonably familiar with the challenges.

“There may be a few areas which I have not experienced but I am quite excited to be taking on that challenge, rather than nervous.”

He felt his partnership with the 29-year-old Marais would develop into a strong combination.

“We have not ridden together before, although I have raced against him a few times. He is a talented rider and is motivated, so that gives me a good feeling about things.”

He said they would definitely be aiming for the top podium spot.

“Any stage wins will be a bonus, but we are looking to finish on top. The main thing is stay upright, not suffer too many mechanicals and take the opportunities when they arise.”

However, he freely acknowledged that Kruger and Marais were likely to be the overall favourites.

Riding for the same brand, Seyffert said he and Kachelhoffer would act as the back-up team to deliver their colleagues to the podium.

As he contemplates his last year of competitive cycling, Seyffert said he would definitely be aiming to end on a high note.

“I will probably call it quits at the end of the year because it’s just too busy to try to be a professional and to work as well,” he said of his job at ASG The Store in Pretoria.

“It would definitely be good to at least win one or two races before I call it quits. But for the TransCape I would like to end in the top five.

“That would be a great result for us as our main focus will be acting as the support team for HB and Stuart.”

With UCI status having been granted to the race, a number of professional overseas riders have entered.

These include Japanese rider Yuki Ikeda, who will team up with South African ace Grant Usher, and Norwegian pros Eirik Fiskvik and Thomas Engelsgjerd. 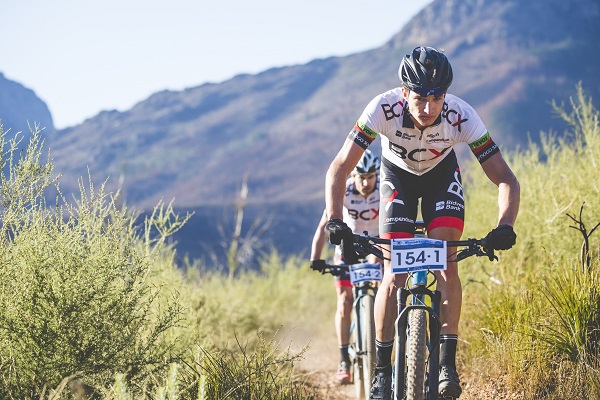 HB Kruger will join forces with Stuart Marais when they ride for ASG-Ellsworth in the seven-stage 614km Liberty TransCape MTB Encounter. The race starts in Knysna on Sunday and ends in Franschhoek on February 10. Photo: Ewald Sadie