Race organisers ASG Events have assured riders that, despite the crippling drought in the Western Cape, the Bestmed Tour of Good Hope and the Liberty Winelands Encounter will go ahead as planned.

The Tour of Good Hope takes place near Paarl from March 5 to 9, while the mountain-bike event, also in the Cape Winelands, will be held from April 13 to 15.

Due to the ongoing drought in the region, several queries have been raised by cyclists, but ASG Events chief executive Wynand de Villiers has given an assurance that the events will take place.

“These are boutique events with a maximum participant total of 500 riders and we are comfortable we can host them without impacting on the current scarce water resources in the Western Cape,” he said.

“I would like to take this opportunity to ensure cyclists that they do not have to worry about whether the events will take place or that their quality will be compromised.

“We have been assured by the City of Drakenstein that guest houses, hotels, restaurants and other businesses will function as normal over the staging period of these events.”

Mindful of the water situation, however, De Villiers added that they encouraged entrants “to be very aware of the water crisis”.

He said this applied, in particular, to the shower time at events.

“We are sensitive to the current situation and we ask riders who are staying in guest houses and hotels to use water sparingly.”

De Villiers said mass-participation events such as the Cape Town Cycle Tour faced a real challenge in the current environment, but that these two events would have minimal impact on water usage.

“We also have a wonderful beer sponsorship from Cape Brewing Company, who ensure bottomless beer at both events. So rather than drink water, drink beer!” he added with a chuckle.

He compared the challenge they faced to a similar situation years ago with events in Gauteng and North West, where water restrictions were in place.

“It’s easy to forget that it was worse back then than the current situation in the Western Cape and we managed to get through it.”

De Villiers said they had put in place a number of plans to ensure that their impact on the water supply was kept to a minimum.

“We have gone into forward agreements with our bottled water supplier and we have more than ample stock available for both events.

“We only use water from a reputable supplier (Aqua Belle) for meals and water points, so we don’t use municipal water at these offset points.

“The only municipal water used is for flushing toilets and showers.”

Furthermore, he said they had set up a waterless bike wash where the supplier used a grease-removing liquid and wiped the bikes, as well as components and chains, with damp cloths. 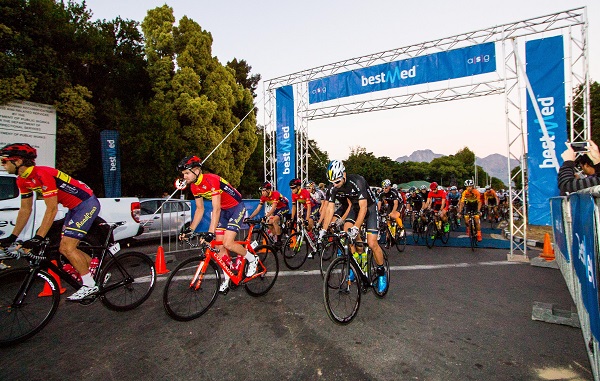 Race organisers ASG Events have given cyclists an assurance that the Bestmed Tour of Good Hope will go ahead as planned from March 5 to 9 despite the water crisis in the Western Cape. Photo: Robert Ward