In a major boost for women’s cycling in South Africa, Demacon announced that they would be racing on HEAD bicycles in the 2018 season.

This follows after the professional team struck a deal with HEAD Bikes SA (PTY) Ltd, who entered the local market late last year, to come on board as equipment sponsors.

“We have had an excellent relationship with Demacon over the past few years and are equally excited at the contribution HEAD Bikes will make.

“It’s ideal for us to be linked to them because no women’s team in South Africa have had a full equipment sponsor in terms of bikes,” said the former Continental and Cape Town Cycle Tour champion.

“I believe this will add huge value to our team. The relationship with HEAD is already working well because they have a very professional outlook.

“Their bikes are top of the range and for each of us to have one is most certainly going to contribute to our chances of success.”

Burger said the team, which would be known as the Demacon Women’s Cycling Team, supported by HEAD Bikes, were strongly focused on competing well in every race they entered.

“Obviously there are other teams out there who want to do the same, but with Heidi Dalton, Kim le Court, Carla Oberholzer and myself we have a quality outfit.

“We are all good sprinters and have strong climbers and time-trialists, so we aim to go out there and win every race we can.

“Heidi is the national road champion, Carla was brilliant last year and Kim is riding for Mauritius in the Commonwealth Games. So we all have something to prove.”

Oberholzer, who won five major races including the Amashova Durban Classic and Jock Tour last year, was also a contender for the team to the Commonwealth Games in Australia, she added.

With the Fast One (in Meyerton on Sunday) where Oberholzer is the defending champion earmarked as their first race, Burger said they were in full training mode.

They are also focusing strongly on the national champs in Oudtshoorn in early February and the Cape Town Cycle tour in March.

“Our mindset is to win these events,” said Burger. “With the riders we have, I believe we can make it a good year.”

HEAD Bikes SA offer a full range of road and mountain bikes to South African enthusiasts, retailing their products through an online system.

Cycling enthusiasts can stay up to date with all the latest HEAD Bike news by following the website link on their Facebook page. 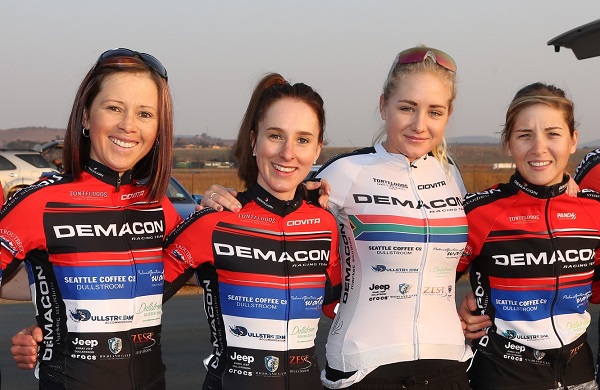 The Demacon Women’s Cycling Team will race on HEAD bicycles after securing a sponsorship with the company for this season, it was announced this week. Photo: Supplied