The 21-year-old Shusha, from Port Shepstone, picked up the men’s 40km title for the first time and Smith, who lives in Durban North, won the women’s event in her maiden appearance.

Shusha said afterwards he had competed in the race before, finishing fourth last year, and was delighted to claim top spot on the podium.

Although there were some tough climbs along the route, Shusha, who led from the start, said he had felt comfortable throughout.

“I managed to build a small lead and was able stay in front throughout the race. I felt I was able to handle the uphills and I still felt quite strong at the end.

“I’m very happy that I was able to win this time after last year’s result.”

The 23-year-old Smith, who grew up in Margate on the South Coast and is sponsored by Bell Equipment, said she had achieved her objective by taking the women’s 40km title.

“Although it was my first Wild Coast race, I knew what it entailed so I came here with the goal to win. I’m delighted that it turned out that way.”

Smith also got away early on and initially rode with the leading men’s bunch.

“After about 5km they left me behind and I rode with another guy for quite a while before dropping him at around the halfway mark. From then I was on my own so it was quite comfortable in the end.”

She had plenty of praise for the organisers, saying it had been “an awesome experience”.

“You can see the route guys really put in a lot of work. That made it a special event.

“There were a few nasty hills, but that was mixed with some great single-track, which gave us a really good experience overall.” 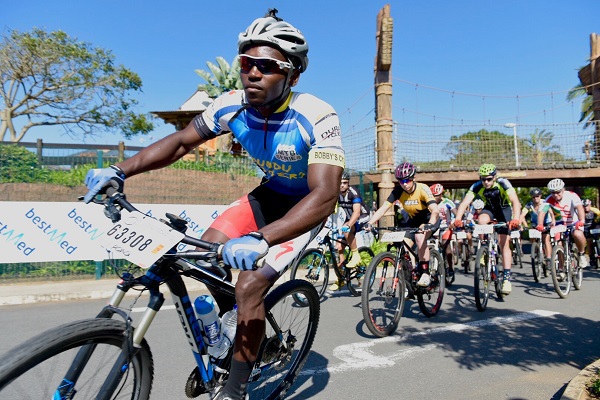 Winner Lindani Shusha, of Port Shepstone, leads the bunch at the start of the 40km race in the Bestmed Wild Coast Sun MTB Classic near Port Edward in KwaZulu-Natal today. Photo: Julian Carelsen