Port Elizabeth runner Amos Nyongo has set his sights on improving his record of 3:52:99 when the Bestmed Eden Street Mile Series kicks off in Oudtshoorn on Saturday.

A 1 500m track specialist, the 39-year-old from KwaZakhele will line up against several top runners from around the country for three races over a mile in the space of six days.

He set the record in last year’s Klein Karoo Mile in Oudtshoorn, which will again be the series opener.

The Klein Karoo leg will also feature a street mile for cyclists, while the Hartenbos event will include a family category in which SA 400m hurdler LJ van Zyl will face off against his wife Irvette, who qualified for the marathon at the Rio Olympics before withdrawing due to injury.

However, the PE runner said he had been training hard in preparation for the series and was looking forward to challenging for the podium places.

“I’m again running in all three races this year and I have prepared very well. I’m in better shape than last year and I want to try to break the record again.”

Nyongo, who is unemployed, said he would also have an eye on the overall series, which offers R4 000 prize-money for the winner.

“I would say that more than 80% of the athletes are focused on that and it serves as motivation to compete in all three legs,” he said.

“Points are allocated for the position they finish in each of the street miles. The athlete who earns the most points across all three races is the winner.”

Nyongo said he knew there would be stiff competition.

“I know the guys I’m running against very well. I know their strong points and weak points because we run together on the track.

“My strategy will be to attack them on the hills and I’m ready for the challenge.”

He said it was essential in a race of this nature to ensure you were properly warmed up.

“Because it is virtually a sprint from the start you have to do a long warm-up. If you don’t do that, your muscles may easily cramp from a fast start.”

The Eden Street Mile Series will carry a total prize purse of R80 400. Besides the Grand Prix Series title, the men’s and women’s winners in each race will receive R4 000.

Simoney Weitsz (KPMG) has confirmed that she will be defending her series title in the women’s section.

For more information go to www.edenmiles.co.za. 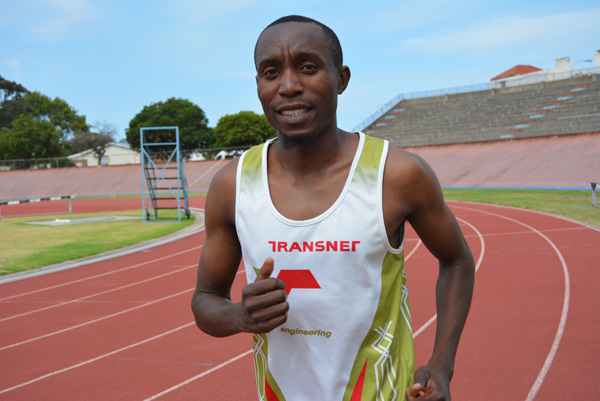 Port Elizabeth runner Amos Nyongo will be out to make an impact when he competes in the Bestmed Eden Street Mile Series, which starts in Oudtshoorn on Saturday. Photo: Full Stop Communications