The three-stage race, which is based in the Zuurberg mountain range at Addo just outside Port Elizabeth, is now perfectly poised for tomorrow’s queen stage after an epic battle saw the top two teams separated by a mere 11 seconds.

The Imbuko-Freewheel Cycology outfit won the 66km stage in 2:42:30, with the TIB Insurance-Contego pairing stopping the clock in 2:42:41. Kargo Pro’s Marco Joubert and Jason Meaton were a distant third in 2:56:43.

Hill and Louw, who won the race in 2014, were looking good at one point, but a wrong turn between the second and third waterpoints saw their lead of around two minutes evaporate in a flash.

This set the stage up for a thrilling finale as the two teams started the eight-kilometre ascent of the Zuurberg pass side by side, with Hill forcing the pace most of the way up.

“We started the pass together and there were a couple of charges,” said the 27-year-old Wolhuter, who hails from Cape Town.

“With about three-and-a-half kilometres to go, Dylan put the pressure on and managed to gap Andrew.

“I came around Andrew and hung on to Dylan’s wheel for dear life. There was nothing in it at the end.”

Wolhuter said the wrong turn for the leading pair was unfortunate.

“We did not know at the time what had happened as they were ahead of us and then came up behind us. So it was quite unfortunate for them, but that sort of thing can happen in mountain biking.”

The two teams lay down the law on the very first climb of the day after setting a fast tempo on the opening stretch of dirt road.

“The stage has changed slightly over the years,” said the 34-year-old Hill, who is based in Durban.

“They have improved some parts and made some sections slightly more rideable. Going down the first single-track into the valley was beautiful.

“We had a nice pace at the start and then out up the other side, which was always the point where we were going to gain some time and maybe make the other teams hurt a bit.

“That is what happened and we built up quite a nice lead at about 40km. Then unfortunately there was the wrong turn and we had to push hard after that.

“But all in all the route was spectacular and it was a really beautiful day.

“Chris and Dylan are definitely the team to watch. Today we had the upper hand but you never know how racing goes.

“We will play it safe tomorrow and see what transpires. You can’t really force it, but we will set a pace and try to keep that pace going.”

Wolhuter paid tribute to Louw, who is from Paarl, for a display of sportsmanship after Rebello came off his bike early on.

“Dylan clipped a rock with his foot and went over his bars. Adriaan stopped to help him and that was great sportsmanship.”

Originally set to ride with Craig Boyes, Wolhuter joined forces with the 21-year-old Stellenbosch rider when Boyes was forced to pull out.

“Dylan, who rides for Momsen, and I have done a few races together. We are still learning each other’s strengths and weaknesses, but we are developing a good relationship.”

Port Elizabeth’s Anriette Schoeman and Hoedspruit’s Samantha Sanders of Africa Silks-Valencia were first across the line in the women’s category while Neill Ungerer and Yolande de Villiers won the mixed section.

The second stage will take participants over a distance of 78km with 2 000m of vertical ascent. 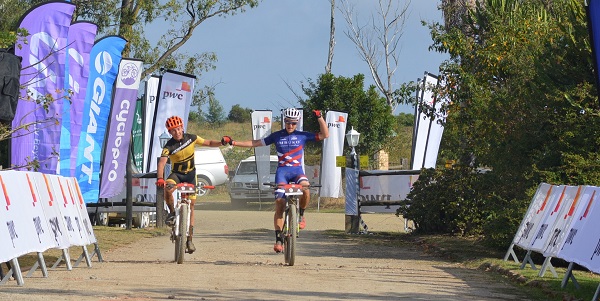