Andrew Hill and Adriaan Louw were able to play it safe on the final day en route to securing the overall title at the PwC Great Zuurberg Trek mountain bike race at Addo, near Port Elizabeth, on Sunday.

Even though they yielded the final stage to Kargo Pro’s Marco Joubert and Jurgens Uys, the Contego-TIB Insurance outfit ran out comfortable winners after completing the three tough stages in a combined time of 8:39:02.

Joubert and Uys, who hail from PE and Somerset West respectively, were runners-up in 8:56:56. Cycle Lab’s Andrew Mclean and former Springbok rugby player Joel Stransky filled the third place on the podium in 9:24:57.

Africa Silks-Valencia’s Anriette Schoeman and former national cross country champion Samantha Sanders swept to a comfortable victory in the women’s category after winning all three stages for a total time of 10:50:04.

In the mixed section, the Head Over Hills pairing of Neill Ungerer and Yolande de Villiers were equally unchallenged as they rode to the title in 9:41:55.

Reflecting on his second victory in three years, Hill said they were highly satisfied with their performance after achieving their goal of top place on the podium.

“We enjoyed the whole racing experience very much,” said the 34-year-old Durbanite, who won at his first attempt in 2014 alongside Paarl team-mate Louw.

“We worked hard to get the lead on Saturday and we could feel that today, but the objective was to aim for the overall win.

“The first day was unfortunate but that set our minds right and we put our heads together and said we have to go out there and do what we are paid to do.”

Disaster struck when the duo went off course on the opening day while leading and lost all of their advantage, but a determined effort on the second stage saw them create a lead that almost made the overall win a formality.

“Yesterday did take quite a bit out of our legs, but today we were very relaxed and chilled.

“After a hard day’s work that’s what you want out of mountain biking – to remember why you are on the bike and why you actually race.”

Even though they have their disagreements, Hill said their partnership worked extremely well.

“We do have a little fight at times, but get on very well and it’s great to ride with a mate. He is a good friend; we’re almost like brothers.”

Despite a string of cycling triumphs in her illustrious career, the 38-year-old Schoeman, from Port Elizabeth, said she and Sanders, who lives in Hoedspruit in Mpumalanga, were thrilled with their overall victory.

“Winning is always a big motivator for me,” said the multiple national road champion.

“I’m a really competitive person and set high standards for myself. This is a really special race.” 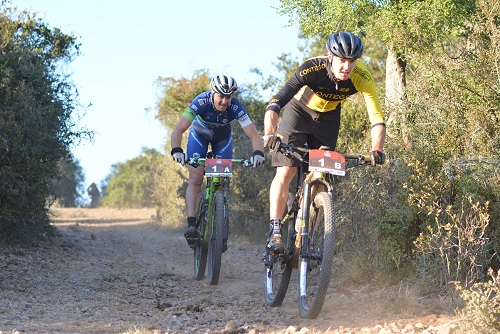