The build-up to the Eastern Cape’s biggest road race started in all earnest when more than 700 youngsters ran their hearts out in the SPAR Little Ladies’ Race on Monday.

The fourth edition of the much-loved curtain-raiser to Saturday’s Women’s Challenge saw little ones aged nine years and younger run 2.5km from Pollok Beach to raise money for the Hope Jones Foundation.

“The race has been fantastic,” said Gary Jones of the Hope Jones Foundation. “It has given us exposure and helps people to be aware of what we are doing.”

The Jones family of Port Elizabeth started the foundation after their daughter Hope was born in 2008 with congenital myopathy, which affected her voluntary muscles.

Her dad (Gary) said she took part and had a great time being among other children.

“This race helps to get the message out there that disabled children are different, but no less than us.”

Local mom Caroline Bedford, who ran with her daughter Emma, said the fund-raising initiative behind the event was a great motivation to enter.

“We ran it last year and loved it. To be able to support an event that brings in funds for those who really need it is very special.”

Little Raania Abrahams, three, of Swartkops said that she had run the race with her mom and entered because “it is lots of fun”.

Four-year-old Emma Thomson of Charlo said that she had decided to run because she wanted to take part in something with her mother and two friends.

Just like the main event, the Little Ladies’ Race was a professional affair with grand prizes, lucky draws, medals and T-shirts for entrants.

“We had a blustery start with the wind and were concerned about numbers, but it was very successful,” said SPAR’s promotions and advertising manager Wendy Westraadt.

“The first race four years ago attracted about 200 runners and this year we hit over 700, so it’s clear that the little ones really enjoy taking part.”

Up to 14 000 runners were expected for the PE leg of the SPAR Women’s Challenge this weekend, said Westraadt.

She said this year’s beneficiaries were the Northwood Children’s Hospice and Nelson Mandela Bay chapter of the Association for Persons with Physical Disabilities.

“All proceeds raised are given back to the community and to charity, so the more people we have taking part, the more we can give back,” said Westraadt.

“We know that this event is going to be a success, but we need the greater Eastern Cape public to join us and help make it great.”

The Women’s Challenge, now in its 23rd year, incorporates 10km (7am) and 5km (7.45am) events, with both starting and ending at Pollok Beach in Summerstrand.

Late registration and collection of race numbers and T-shirts will take place at Pollok Beach from 9am to 7pm on Thursday and Friday. Participants can also register from 5.30am on the morning of the race. 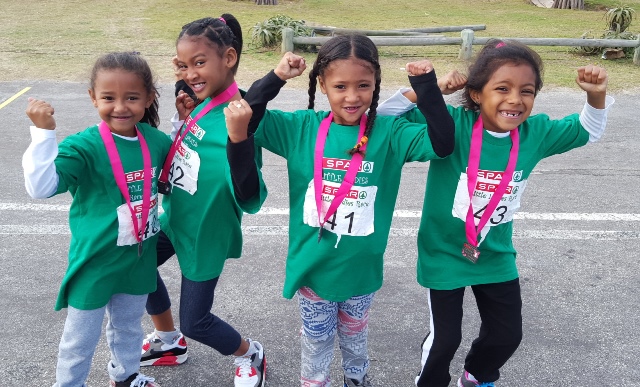 Little ladies from all over the Eastern Cape turned out in their droves for the SPAR Little Ladies’ Race, which is a curtain-raiser for this Saturday’s SPAR Women’s Challenge. Photo: Full Stop Communications