University of Johannesburg overcame a remarkable period of scoring by Wits in the Varsity Hockey men’s tournament in Stellenbosch on Monday to qualify for their second successive final.

Defending champions UJ will be targeting their second title in the biennial competition after winning the inaugural tournament in 2014.

They will face Tuks on Monday at UJ after the Pretoria varsity beat Maties 1-0 in the other semi-final.

UJ looked in danger of conceding their title when Wits went 4-0 up in a burst of scoring from the 26th to the 34th minute, but the champions showed their mettle by fighting back in dramatic fashion to level at 4-4 in the remaining 26 minutes.

Then, with goalkeeper Matthew Martins holding his nerve, they showed composure to win the penalty shootout 3-1.

UJ coach Garreth Ewing acknowledged relief at having pulled off an extraordinary escape act and was delighted with the mental fortitude of his players.

“It just goes to show that hockey is played over 60 minutes and you have to just keep going. Anything can happen if you just keep plugging away.

“I think we played the first three games of the weekend really nicely, but there were a few things we wanted to tidy up on.

“Last night (against Wits) we dominated on the stat sheets, but we were weak defensively,” said Ewing.

“However, the guys took a mental step in the last 10 to 15 minutes and that was nice to see. We were calm in the shootout, but obviously relieved to get through.

He said all the pressure was on the defending champions.

“Wits played like they had nothing to lose, but we are excited to be in the final.”

After losing to Maties in the league phase, Tuks hit back in the semis, showing they will represent a major obstacle for the champions.

“We know they are a good defensive unit and it will be a big challenge,” said Ewing.

“They have some really good individual players but people underestimate their level of teamwork. It’s a big rivalry for us and for them, so it’s going to be exciting and a really tough game.”

Having gone through the league phase unbeaten to top the log, UJ have earned home-ground advantage for the final.

“Finals are their own monsters, but being at home is an advantage,” said Ewing.

“Being two teams from the Highveld does even it out, but I think playing at home will be great for us and we are looking forward to that opportunity.” 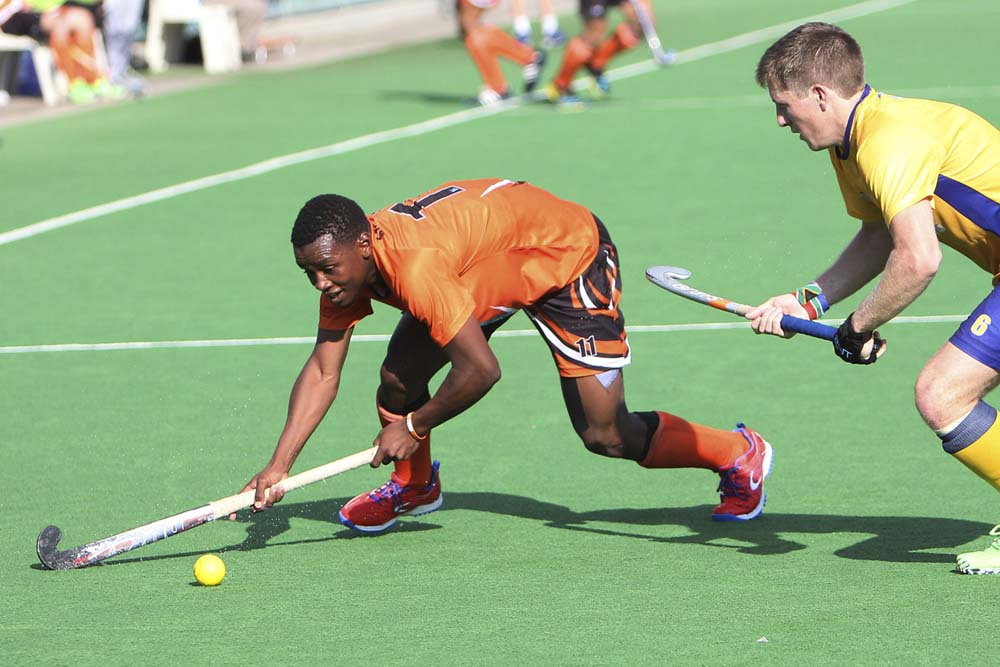 UJ’s Amkelwe Letuka fights for possession during the Varsity Hockey tournament in Stellenbosch at the weekend. Photo: Saspa