The second leg of the ProTouch Cycling Club National Criterium Series, which is held in conjunction with the Emperors Palace Road Classic on Sunday, April 10, will mark a return to the famous old circuit featuring the Chariots Statue.

“The support of Emperors Palace has allowed us to reinstate the traditional route that enables spectators to witness the thrills of criterium racing at close quarters,” said Wynand de Villiers of ASG Events.

“Not only have we received permission to remove the speed bumps on the route, the Gautrain buses will also be diverted for the two-hour period of the criterium to ensure an uninterrupted flow of racing.”

De Villiers said the crit at Emperors had been running for nine years, but formed part of the new Liberty-supported series for the first time.

“In the past we limited the standalone race to an elite field of 30 riders, but the series now incorporates all CSA licensed categories.”

After the success of the first leg that took place alongside the Berge en Dale Classic in February, Tony Harding of ProTouch Sports anticipated a great vibe at the event, which follows directly after the 98km feature race.

He said criteriums were fast and furious and added tremendous crowd value.

“One can almost reach out and touch the riders. Unlike normal road races where you only see the start and finish, the lap format on a closed circuit allows you to watch a complete race unfold before your eyes.”

He believed criterium racing was the perfect add-on to road races and afforded the country’s top riders an opportunity to showcase their skills.

“They need this type of racing to display their talent. Tight circuits featuring lots of starts and stops suit riders with good bike handling skills and lots of power.”

Harding said there would be a ProTouch Cycling Club Chill Zone presented by Liberty on the day and they welcomed enquiries as to the benefits of joining the club.

“Liberty have identified a large number of their client base as cyclists and it makes sense for them to get involved in a virtual club in what is still one of the fastest growing sports in the country.”

The Emperors Palace MTB Classic, which is presented by OR Tambo International Airport, takes place the previous day.

For more information, visit www.asgevents.co.za or find the race on Facebook. 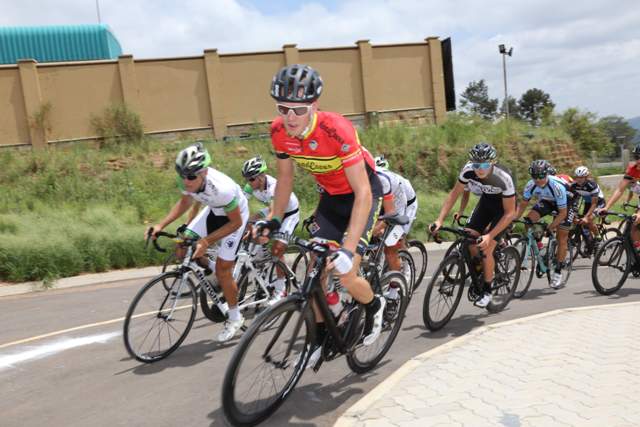 JC Nel (left) and Stuart Fitzpatrick lead the peloton during the first leg of the ProTouch Cycling Club National Criterium Series. The second race in the series, which is supported by Liberty, takes place alongside the Emperors Palace Road Classic on Sunday, April 10. Photo: Rika Joubert