Port Elizabeth’s Daniel Jones summoned up his best form in the nick of time to retain both his titles at the SPAR River Mile Festival at Cannonvile outside Port Elizabeth this weekend.

The 18-year-old Bay Eagles swimmer beat his brother Wayne and Sean Murray in the double mile on Saturday and then got the better of pre-race favourite Ian Venter and Nicolas Adam in today’s feature race over one mile on the Sundays River.

“That was very, very tough,” Jones said after dramatically edging ahead of Venter at the finish. “The last 50m was just flat-out with us going at each other.

“It was a hectic finish and I’m just so stoked to retain my titles.”

Jones said both Venter and Adam had gotten the better of him in open-water swims in recent weeks.

“They actually beat me by quite a bit, but this past two weeks I actually drilled myself and that got my fitness up.”

He said with the extra work that he had put in he felt he could win the double mile.

“I went there and pushed myself and got it. That gave me a huge confidence boost for today.”

Jones said he decided to go flat-out from the start of the feature race to “try pull a lead” like the previous year.

“I slowed at halfway and just got into a rhythm. I then felt someone, probably Ian, at my feet and from there I had to just push.”

The two rounded the jetty in the final 50m shoulder to shoulder with Venter holding the faster inside line.

“I pushed and said to myself to just stay with him until the end because I do lifesaving and I thought I would have an advantage running out.”

Jones said he enjoyed choppy conditions and that the rough water in the double mile had suited him more than today.

“Although the start of the mile was a bit bumpy, today was flatter and I had to work very hard.

He said he almost thought he had lost the race at one point.

“The run out was the main thing. That is what it came down to.”

Sixteen-year-old Hannah Haswell of PE Amateur Swimming Club, last year’s dual champion, retained her title in the double mile by beating Kirsten Marriott and Tracy Gous to the top step of the podium.

She however faded in the shorter feature event to finish fifth, with her club teammate Jessica Canter taking the win ahead of Amica de Jager and Jessica Beukes.

After placing third last year, 16-year-old Canter took charge of the race early on and never relinquished the lead.

“I wanted to start in the middle where the current was stronger and take the straightest line to the finish,” said the Pearson High School pupil.

“I felt like I had the race in the beginning. When I looked both sides the next person was a few metres behind.

“But towards the middle there was a girl right next to me and at that point I was a little bit unsure and felt I had to pick it up.

“Then, towards the end, I saw Jessica Beukes coming in from the side and that was a little worrying, but I had the cleaner line and was pretty sure I had it in the bag.”

Go to www.rivermile.co.za or SPAR in Action on Facebook for more news. 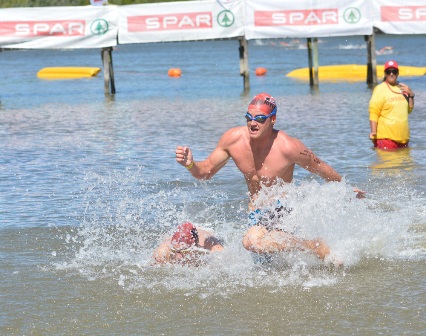