Mecer Madibaz Cricket Club will honour Simon Harmer, NMMU’s first test cricketer to be selected for the Proteas since the university’s merger in 2005, at a special function when he returns to Port Elizabeth next week.

Harmer made his debut for the national team in the third Sunfoil Series test against the West Indies at Newlands in Cape Town on January 2.

The off-spinner played a significant role in leading South Africa to victory, returning match figures of 7/153 in 50 overs – the second best figures for a Proteas spinner on debut.

“I don’t know if words can quite put it into perspective how it feels to be able to walk out onto the field and represent your nation,” said Harmer.

He said the supportive team environment had helped to calm his pre-match nerves.

“Everyone is looking out for one another. It was nice to know that the guys had my back no matter what the outcome.”

He said a few of the players, including captain Hashim Amla, had words of advice for him before he walked onto the pitch.

“Hashim said to me that I should just relax, enjoy it and just do my best.

“My first over I couldn’t really feel my arms or pretty much any of my body. I was just trying to focus on the technical aspects that I knew would get the ball in the right place, which luckily it did.”

When the first wicket fell, it put the seal on a dream come true.

“Watching my first wicket on the replay and seeing how happy the guys were for me, especially AB (de Villiers) and Dean (Elgar) was a really special moment. It’s something no one can ever take away from me.”

The 25-year-old’s love of cricket was nurtured from a young age, as he practised with his brother in the garden of their childhood home in Pretoria.

“I was the type of kid with posters all over my room of famous cricketers; I wanted to be just like them and play for South Africa one day.”

Harmer finally received that call-up to the Proteas while shopping at Woolworths in Jeffreys Bay in December.

“I tried to keep it together, but didn’t really manage to do that. I broke down and started crying.”

A passing shopper patted him on the back and attempted to console him, before an emotional Harmer could explain that he had actually received wonderful news.

Having been a regular member of the SA ‘A’ side, his future ambitions include breaking into other formats for South Africa and representing the country for as long as possible.

Harmer attributed his success to the opportunities presented by the Madibaz and Chevrolet Warriors franchise.

“The reason I got to represent South Africa was because of the Warriors and because of NMMU. The opportunities afforded me by Madibaz manager Riaan Osman helped me get established and let my cricket career take off.”

He first joined the university club in 2009 after accepting a bursary and enrolling for a law degree.

Harmer will be addressing the Madibaz squad when he returns next week to assist in their preparations for the inaugural Varsity Cricket tournament.

The club will honour their hero at a VIP function on NMMU South Campus on Wednesday. 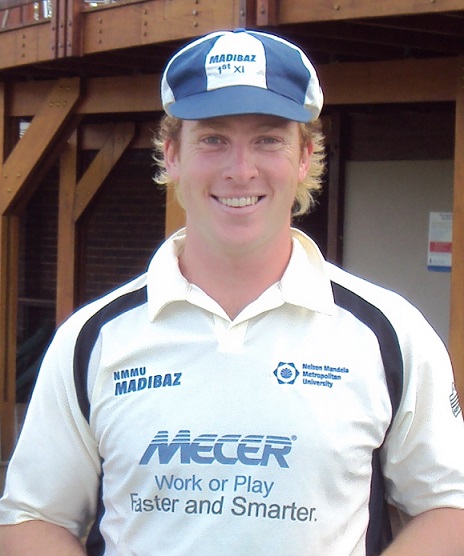 Simon Harmer, NMMU’s first test cricketer to be selected to the Proteas since the University’s merger in 2005.