Experienced fullback Jarryd Buys will lead the new-look NMMU Madibaz on their road to the 2015 Varsity Cup, team management announced in Port Elizabeth this week.

Madibaz head coach David Maidza said Buys, who has been vice-captain for the past two years, was the ideal candidate, as he had strong personal integrity and a clear vision for his future.

“Jarryd’s understanding of and authority over people around him, whether they be his juniors or seniors, is of the highest repute,” said Maidza.

“I’m glad to have him return to NMMU for the Varsity Cup and he’ll prove worthy of his position in the team.”

He said the approachable 24-year-old marketing student brought a much-needed calmness to the side.

“Jarryd came back from an injury a couple of games into the tournament this year and the team immediately felt much more composed. He is well respected among his peers.”

Buys – who also captained the national student sevens side at the 2013 World University Games in Russia – said he was delighted to be stepping into the role vacated by front ranker Roy Godfrey, who has signed with French outfit Perpignan.

“We still don’t have that Varsity Cup trophy in our cabinet, so that’s keeping my hunger alive.”

With a completely new forward pack and a largely unchanged backline, Buys said the challenge would be to adapt the Madibaz game plan to suit the individuals on the field and get the best outcome for the team.

“There is a new line-up of seniors and big changes from last year, so it’s a chance to start afresh and also build on what we have achieved over the past couple of seasons.”

Formerly overlooked as underdogs, the Madibaz came within striking distance of the trophy in 2013 and 2014 but suffered a single-point semi-final loss on both occasions.

After being seen off by Pukke in this year’s competition, the PE team will have a chance to avenge themselves in the first match of the new campaign on February 9.

“Playing Pukke away in the first game of next season will be a huge test, as they are a team we’ve never beaten since the inception of Varsity Cup,” said Buys, whose semi-final drop goal was almost a game-changer this year.

“We obviously want to take it one game at a time, especially with the first game being such a vital one, and then look to qualify for a semi again.

“I’d be lying if I said we weren’t aiming to win it but first there are seven hurdles that lie in wait before the play-offs.”

The Old Selbornian, who has also represented the Leopards and SWD Eagles Currie Cup squads, said his men had some serious work to do in order to advance their ambitions.

“There’s a good mix of youth and experience and it’s a great opportunity for some of the younger guys to showcase their talent and put their hands up for future years under the guidance of the older guys.”

Elliot-born Buys is no stranger to the Varsity Cup competition, having also represented Maties during his undergraduate studies in 2011 and 2012. He enrolled for a postgraduate course in financial planning at NMMU last year.

“Building on the brotherhood we have at NMMU is something I’m striving to maintain and also grow. I think leadership is about trust and respect, and with that a team can achieve just about anything.”

Buys is currently recovering from knee surgery and looking forward to leading his team onto the field for the FNB Varsity Cup, presented by Steinhoff International.

With four home games, three of which will be televised, he said he hoped to fill the Madibaz Stadium and “give the people an exciting brand of rugby to shout about”. 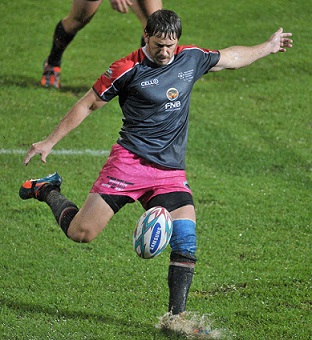