Swedish marathon champion Jennie Stenerhag and cross-country specialist Robert Sim took the honours in the inaugural Bestmed Paarl MTB Classic, presented by the City of Drakenstein, in the Cape Winelands on Sunday.

Sim, riding in the colours of Robert Daniel, crossed the finish line first at the Paarl Arboretum to claim the men’s 60km title in a time of 2:44:08.

Stenerhag, who finished second alongside Candice Neethling in last week’s Wines2Whales stage race, took an uncontested victory in the women’s race in 3:01:13.

Trailing the Cape Brewing Company rider by a good 10 minutes was Marleen Lourens, who clocked a time of 3:11:13, while Nadia Visser rounded out the podium in 3:12:52.

According to Sim, the crisp windy conditions on the day and long stretches of single-track riding had played perfectly into his hands.

After stopping shortly after the start to adjust his tyre pressure, he said he had been forced to race hard initially to catch the leaders.

“There was a group of about 10 guys going up the first hill, which was a flattish climb on a dirt road and not too technical.

“Immediately I could see that Craig was strong at the front because that type of surface suits him as a former road rider.”

Sim said he had been happy to sit behind the first four riders and catch his breath as he plotted his strategic getaway inside the Paarl Mountain Nature Reserve.

“I was cognisant of the fact that there would be a long single-track coming up and that’s my specialty.

“I wanted to get into that section first, so that’s what I did and luckily got a bit of a gap there.”

The Capetonian put a couple of minutes into chasers Stelling and Gerber on the flowing 10km descent.

On the snaking trails through the Rhebokskloof Wine Estate, Sim caught sporadic glimpses of his pursuers but maintained his almost two-minute lead as he rode alone for the second half of the race.

“On the second climb, which was quite long, I put a bit more time into them. When I crested the hill, I looked back and couldn’t see them but they must have made some gains over the last 20km.”

Their efforts were however not enough to catch Sim over the closing kilometres as he raced unaccompanied through the streets of Paarl to the finish.

“Having so much single-track definitely played to my advantage.

“Had there been more flats, and with that wind, I think Billy and Craig could have worked together and closed the gap as they’re both strong riders and bigger than me with more power.”

With nine stage wins in the Cape Epic masters category under his belt, the 48-year-old said the race had been the ideal start to his base training for the 2015 campaign alongside Nico Pfitzenmaier.

“The Epic has two or three days of similar riding in the Wellington area, so this terrain is very good for that.

“The single-track coming down off the top of Paarl Mountain was a revelation – it was actually world class.” 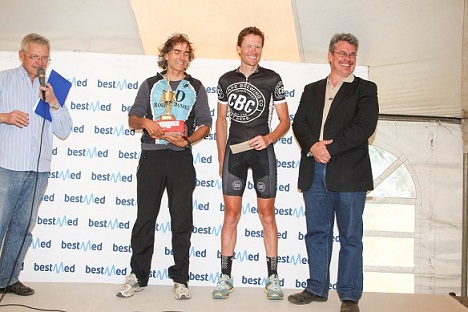