The NMMU Madibaz karatekas will be looking to lay their hands on the full-contact title for a sixth year in a row when they host the University Sport South Africa Karate Championships in Port Elizabeth from November 30.

The two-day national champs will see more than 200 participants from 20 universities descend on the North and South Campuses of Nelson Mandela Metropolitan University to compete in the full and semi-contact categories.

The institution, which last hosted the event in 2008, has dominated the former category for the past five years.

According to Madibaz martial arts manager Bernard Petersen, the public could look forward to some exciting fighting in the all-styles competition.

“Although we are the defending champs, we are building a new team this year so we are realistically aiming for a top-three finish,” said Petersen.

“But if everything goes according to plan, we have our sights set on the title again.”

Petersen said the Madibaz’s hopes rested largely on the shoulders of the Maxama brothers, Nyameko and Mbongeni.

“They are possible gold medallists in kumite or freestyle fighting.

“We normally also excel in the kata, which is an individually performed sequence of movements.”

At the Kyokushinkaikan SA Champs in July, NMMU Karate Club sensei Nyameko placed first in the advanced kata and clicker in the under-80kg weight category and also claimed the runner-up spot in the knockdown event.

His sibling, senpai Mbongeni, won the clicker competition in the under-70kg category.

The student champs kick off with the official registration and weigh-ins on the Saturday (November 29).

The Heinz Betz Hall on NMMU’s North Campus will be the venue for the full contact competition on the Sunday and Monday, while the South Campus indoor sports centre will host the semi-contact category on the Sunday. 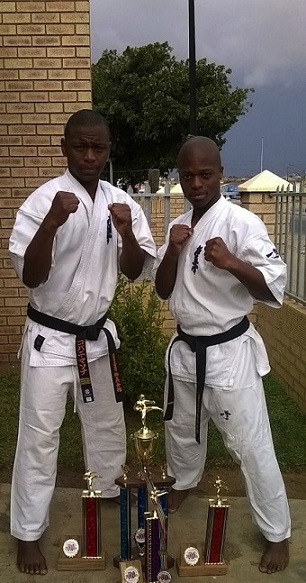 Brothers Nyameko (left) and Mbongeni Maxama will head the Madibaz’s charge for a sixth consecutive full-contact title at the Ussa Karate Championships, hosted by NMMU on November 30 and December 1. Photo: Supplied