Top KwaZulu-Natal mountain biker Tyron Bird will have another shot at the Bestmed Ballito Expedition title when the race, which is presented by ASG, rolls out near the North Coast town on Saturday.

Bird, who rides in the colours of Quattro, will be hunting for the win after tyre issues put him out of contention last year.

The Kokstad-based rider finished second in the 2012 Expedition, which was formerly held near Inanda Dam.

“Last year was the first time it was held at the new Sugar Rush Adventure Centre venue, so I came to check out the area and ride some of the great trails on offer up in Ballito,” said Bird.

“This year, I’ll be back for the racing!”

He is currently in good form after claiming the runner-up spot alongside Brad Stroberg in last month’s three-day FedGroup Berg & Bush Descent.

“I’m feeling the effects of this past year, as we are at the end of the season, but I’m confident I can pull something together for the last few races.”

Bird, who started his season with a win at the Berg 100, said the 50km Ballito route was suited to power riders like himself.

“It should suit me because I can ride at a good tempo and then get through the short technical sections nice and quickly.”

The 24-year-old said his Berg & Bush partner would definitely be one of the riders to watch.

“I think my competition may come from the likes of Brad and Joshua Nelson. They are both showing some good end-of-year form.”

Reigning champ Tyronne White will not return to defend his title, and his share of the R10 000 prize purse, as he will be racing the Wines2Whales stage race.

According to route director Darren Herbst, the feature route is “one tough cookie”, with a total elevation of 900m, 25km of new trails, four fresh forest sections and at least three river crossings.

“There’s also some amazing single-track and a couple of hairy climbs,” said Herbst.

“Although not for the faint-hearted, it’s a very special route that has a bit of everything in it.”

He said some of the trails had never been ridden, with sections guaranteed to take a rider’s breath away.

“The first 20km are going to be fast and furious, with the guys having to keep their breath in and their egos in check, because they’ll need their legs in the last half.”

Herbst said a few new single-track and forest sections had also been added to the 25km route.

“It’s fun, fast and spectacular and will leave you wanting more. Newbies and novices will love the route.”

Registration takes place at the Sugar Rush Clubhouse on the morning of the race.

The main sponsors for this event, Bestmed and its partners Incolabs, will supply all participants with free sunscreen for the day, with R10 from every entry fee being donated to the Cancer Association of South Africa. 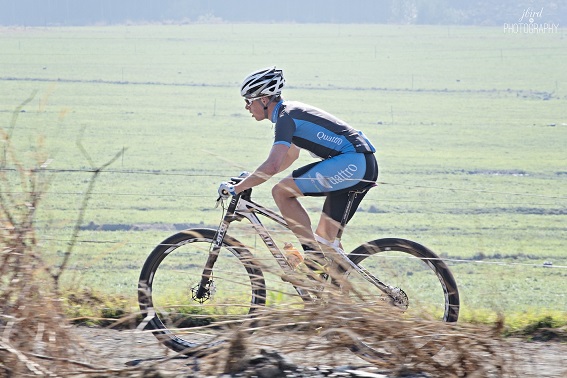 Mountain biker Tyron Bird will be one of the major contenders for the Bestmed Ballito Expedition, presented by ASG, which takes place on the KwaZulu-Natal North Coast on Saturday. Photo: JBirdSA