Fouché, who is the country’s highest qualified long and triple jump coach, was recognised for her outstanding achievements at national and international level as well as two decades of service to UJ Sport.

Speaking after the ceremony, Fouché said she was honoured to receive the award.

“It’s nice to know that I’ve contributed to the global excellence and stature of the University of Johannesburg. I humbly acknowledge the fact that I’m blessed to work with world-class talent though.”

This season, Fouché’s protégés grabbed the spotlight at a number of international competitions, starting with the Commonwealth Games in Scotland in July.

There, triple jumper Khotso Mokoena grabbed gold with a leap of 17.20m, while SA long jump champion and UJ Sportsman of the Year Zarck Visser jumped 8.12m to secure the silver medal in his event.

In August, Visser and Mokoena travelled with Fouché to Morocco, where the duo earned the African champion titles in the same disciplines.

Mokoena – who won two Diamond League meetings en route to the overall series win in the long jump – also took the runner-up spot behind Visser in this item. Another of Fouché’s athletes Roger Haitengi claimed bronze for Namibia.

The coach and her jumpers closed out their international season in fine style for Team Africa at the IAAF Continental Championships in September. Mokoena set a new South African record of 17.35m to take the triple jump silver, while Visser finished third in the long jump.

Both are currently ranked among the IAAF’s top 10 long and triple jumpers worldwide.

Fouché, who has more than thirty years of coaching experience, said it was just as rewarding to see her athletes succeed as it had been to compete herself.

“It’s also just as disappointing for me as it is for them when they don’t do as well as planned.”

The IAAF level five certified instructor said it was important to adopt a holistic approach to training – focusing on body, mind and soul. Her athletes put in at least 28 hours per week in UJ’s well-equipped gymnasium and on the internationally accredited athletics track.

“Talent, commitment, desire, drive, integrity and character are the hallmarks of a great athlete. Passion will ensure success.”

She said her personal coaching philosophy, inspired by her mentor Bessie Windell, hinged on the fact that every athlete was unique.

“If you want to teach Johnny Latin, you must know Latin . . . and you must know Johnny. If you don’t know what works for you and your athlete, the goals will always remain distant dreams.

“You need to be in tune with what his body can do. Decision-making is constantly required and the outcome must be envisioned and then dealt with.”

Fouché’s coaching efforts have earned her further accolades, with nominations for coach of the year at both the Gauteng and SA Sports Awards.

While finding the work-life balance remained a daily challenge, the Linden resident said her family supported her ambitions.

“We’re already working towards the world champs next year and then the Rio Olympics in 2016!”

Fouché’s honorary commendation has only been bestowed three times in the history of UJ Sport.

She joins the illustrious company of the world’s leading women’s hockey goal scorer Pietie Coetzee; explorer Alex Harris, who summited the highest peaks on all seven continents and was the first African to walk unsupported to the South Pole; and paralympian Pieter du Preez, who became the first quadriplegic athlete to complete a full Ironman triathlon. 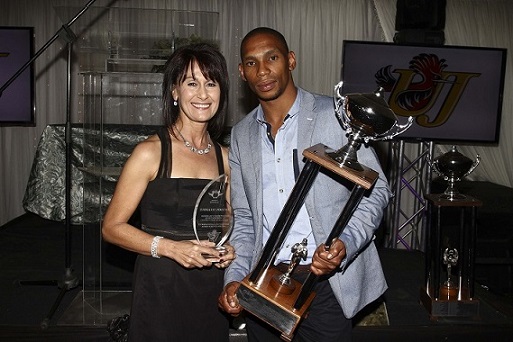 National jumps coach Emmarie Fouché (left) received an honorary commendation for her contribution to athletics at the annual University of Johannesburg sports awards gala last week. Here she is pictured with her protégé and national long jump champion Zarck Visser, who was named UJ Sportsman of the Year. Photo: Eon Botha