SPAR Eastern Cape put the spotlight on children in need at its annual Back to School trade show at The Boardwalk Convention Centre in Port Elizabeth on Thursday.

More than a hundred suppliers and SPAR retailers attended the annual expo, at which the new product ranges for the 2015 school year were unveiled.

In keeping with the theme of the event, the retail giant and participating suppliers handed over a cheque to the value of R10 000 to the SOS Children’s Village PE.

SPAR Eastern Cape marketing manager Abri Swart said they had chosen the non-profit organisation because it focused on the critical areas of childcare, education and health.

“SOS Children’s Village provides a secure and loving family environment for as many orphaned and abandoned children as possible and gives them the security of a functional family and a brighter future.”

Swart said the excess stock from the trade show would also be handed over to the organisation.

SOS Children’s Village fundraiser Mandy Spies said she was “over the moon” at the donation, as the organisation’s funding from the department of social development had been reduced due to budget constraints.

“We rely heavily upon local donations to help us provide quality care for our large SOS family. We feel blessed to have been selected as the beneficiary.”

Spies said the organisation faced the same basic challenge as all NGOs, which was dwindling financial support and a growing number of people dependent on their support.

The PE branch is one of 11 programmes operating under the auspices of SOS Children’s Villages South Africa and supports more than 500 children in Nelson Mandela Bay.

At the local Village in Schauderville, some 90 children without parental care have been placed in the 14 family houses.

The organisation also supports a further 420 children who are at risk of losing parental care through its Family Strengthening Programmes in the metro.

Spies said the tie-in with the theme of the trade show was particularly fitting and that the funds would be used towards the children’s schooling. 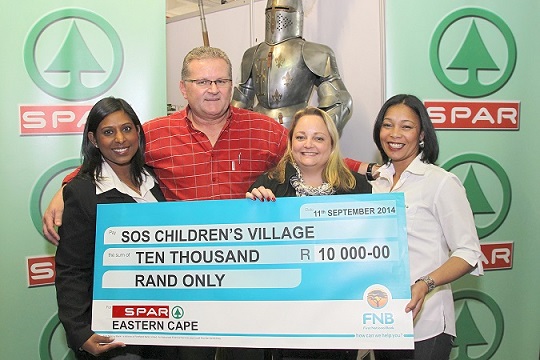