The SPAR NMMU Madibaz have maximised their firepower for three pivotal Varsity Netball home games that start in Port Elizabeth this weekend.

“With three tough games coming up, I felt we needed more experienced players to take us through the weekend,” said Chauke.

“Our defence needs to be tighter and our attack more effective. We’ve been working on our attacking movements and getting the girls to take the ball through to the shooting circle more efficiently.”

She said the VUT game would be unpredictable as their opponents needed a win but added that the Madibaz would stick to their game plan and not allow themselves to be distracted.

“Maties will be a tough game since they lost to Pukke last weekend and will be aiming to recover from that.

“Tuks on the other hand have come off a win against Kovsies in Bloemfontein, so they’ll be looking to continue their winning streak. We’ll just need to work towards achieving our own goals for that match.”

Despite this, she said her players were undaunted and looking forward to playing in front of their home crowd.

“I’m not one to sit and calculate or make predictions. We are taking it one game at a time, one ‘tick’ at a time.”

Chauke said this weekend’s fixtures could be the decisive moment in this year’s competition but that the Madibaz were firmly focused on a top-four finish.

“With the young team that we have we are doing well.”

She said local supporters could look forward to top-class netball, sponsored giveaways and a great atmosphere at the games, which take place at the NMMU South Campus courts.

Tickets are free of charge and available at the venue or from SPAR NMMU Madibaz netball manager Theresa Le Roux on 041 504 3145 or theresa.leroux@nmmu.ac.za. Gates open one hour before the start. 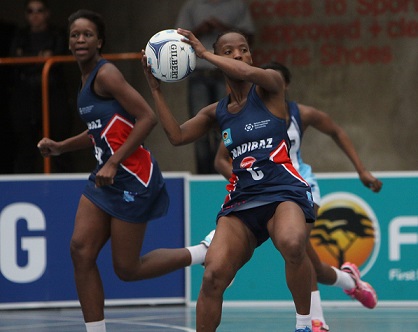 Nandipha Jack will be one of the players adding her experience to the NMMU Madibaz team for the weekend’s Varsity Netball action in Port Elizabeth. Photo: Thys Lombard/Saspa