Participants in next month’s FedGroup Berg & Bush mountain bike stage race can look forward to a spectacular new drop off the Drakensberg escarpment, organisers have announced.

Known as the Drakensberg Drop, the new section will take riders on a long and scenic descent via ancient cattle paths from the Free State border into KwaZulu-Natal.

Race organiser Gary Green said his route building teams had been working hard to prepare the changes in time for the event, which rolls out from the new Border Post start venue at the top of Oliviershoek Pass on October 10.

“The Drop makes a far better descent off the mountain as it winds its way down through the hills and valleys and along a river bank, where the riders can really enjoy the amazing scenery.”

Day one alone would now feature over 2 200m of descending with 1 500m of climbing, said Green.

He said participants in the two three-day options – the Descent and Great Trek – could anticipate further changes on day two, with the traditional boat crossing of Spioenkop Dam abandoned in favour of uninterrupted riding.

“We now approach Spioenkop Mountain from another direction, using the old Fairview road, which was the original wagon track between Ladysmith and Bergville.”

Coming down off the gruelling Spioenkop ascent, he said riders would also encounter a new section of berms and jumps, named the Bell Run in honour of section sponsor Bell Equipment.

“The Bell Run has also been included on the original two-day event, so our more social riders won’t be left out of the fun.”

Green said many additional sections of fast-flowing single-track were being included, as his team continued to uncover well-trodden cattle and game paths.

“At the moment, we have three teams of four people who go out every day to ensure that the route is race ready. But most of the additional route preparation is done by the local people living in those areas.”

One of last year’s signature sections, the enclosed JoJo tank tunnel across the Tugela River, had been transformed into a floating bridge after floodwaters washed the tunnels away, he added.

The event starts with the 222km Descent on October 10, followed by the Great Trek on October 14 and the 110km Two-Day event from October 18.

The two-day event starts and finishes at Emseni Camp race village on the banks of the Tugela River near Winterton, which is also the overnight stop for the three-day races. 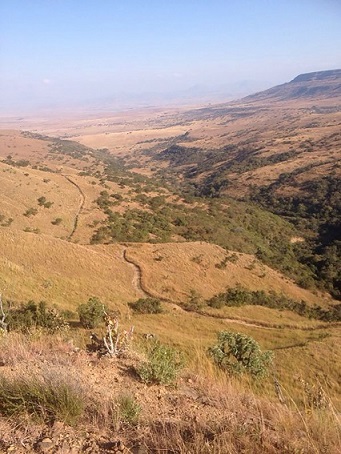 The FedGroup Berg & Bush mountain bike stage race will feature a brand-new drop off the Drakensberg escarpment when it starts near Sterkfontein Dam on October 10. Photo: Supplied