The Bestmed-ASG women’s cycling team have announced the signing of elite triathlete Lauren Dance as part of their line-up for the 2015 season.

Dance, who finished second at the ATU Africa Championships in Zimbabwe earlier this year, will make her debut for the squad at the Momentum 94.7 Cycle Challenge in November.

The 24-year-old University of Johannesburg student said she was excited about the fresh challenges and new learning opportunities that being part of a pro team presented.

“I usually race these events alone, so I’m looking forward to being part of the team dynamics.”

While triathlon remained her core focus, Dance said riding for Bestmed-ASG would help to boost her cycling performances across both sports.

“Of the three triathlon disciplines, cycling is my strength, but it is underestimated in triathlon. I plan to use the races and my teammates’ experience to help me learn more and get stronger.”

The former U23 national champion, who will continue to compete in triathlon under the MAD Multisport banner, said she also hoped to add value to her new team.

“Road cycling will be balanced around the international triathlon season. It usually fits together quite well, so once we know the international calendar, I’ll be able to confirm my availability for local road races.”

This season, Dance finished ninth at the ATU Africa Cup in Cape Town and participated for the fourth time at the world triathlon championships in Canada.

“I’ve known Lauren for a number of years and we’ve been wanting to bring her on board for a while but her triathlon commitments just would not allow it.

“So we’re very pleased that the opportunity has finally presented itself.”

Botha said Dance was very strong on the bike and would be an excellent support rider for his team.

“She has the ability to set a very steady pace for long periods of time, while her triathlon skills also make her a good option as a breakaway rider.” 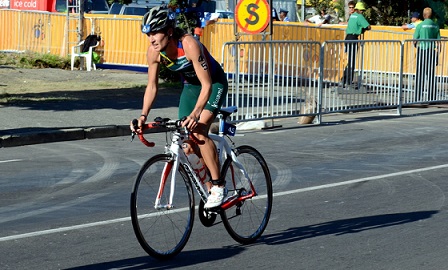