University of Johannesburg students Cheyna Tucker and Ruan Olivier will represent South Africa at the World University Squash Championships in Chennai, India, from September 1 to 8.

The pair was selected on the strength of their performance at the University Sport South Africa tournament in Stellenbosch in July.

Their teammate Elani Landman has been chosen as the non-travelling reserve.

According to UJ squash manager Linly de Beer, the university went through the entire Ussa tournament – which featured 17 teams in a cross-pool format – without losing a single match.

“Although this may seem like a walkover, both the NMMU and Tshwane University of Technology teams had some incredible players who did cost us individual games.”

The university however rallied to their third gold medal in as many years at the national tournament.

De Beer said that although both Tucker, who is currently ranked number one in SA, and Olivier had undoubtedly contributed greatly to their overall win, it had been a solid team effort.

De Beer attributed his team’s ongoing success to the high performance programme that was instituted in 2012 to improve the quality of squash at UJ.

“The main objective is to create opportunities for top school players to further their professional squash careers, while preparing for a life after squash.”

“The programme has become so successful that players from all over the country apply at UJ for an opportunity to be part of it.”

He said his team worked extremely hard for their successes on court and off, and that a number of players had also won awards for academic performance over the past few years.

“We would be failing our students if we put sport ahead of academics. To ensure a good balance in both, UJ Sport offers an academic support section whose sole responsibility lies in the academic monitoring of its student-athletes and providing the necessary interventions.”

De Beer said Tucker and Olivier, who both live close to campus in Westdene, were just two of the players who had taken their game to the next level as a result of the programme.

“The training is quite stringent and, when combined with the Central Gauteng leagues and other tournaments that are played throughout the year, it does ensure that only the fittest and toughest survive.” 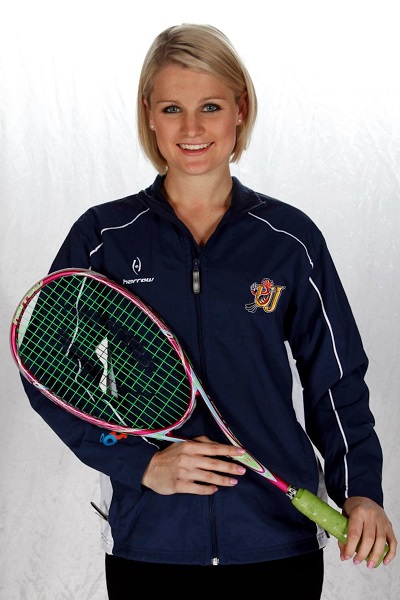 University of Johannesburg squash player Cheyna Tucker, who is currently ranked number one in the country, will be one of three UJ students representing South Africa at the World University Squash Championships in India in September. Photo: Supplied