After last night’s 2-1 defeat against the University of Western Cape in Port Elizabeth, the NMMU Madibaz must win all their remaining matches to stay in the hunt for the Varsity Football semis.

Madibaz head coach Graeme Harrison said that although the home team had dominated in the first half, they were discontent with the turn of events.

“We always go in seeking a positive result, so obviously last night was disappointing.

“We missed a few opportunities in the first half to kill them off and that came back to haunt us in the second.”

Although the game ended in the opposition’s favour, Harrison felt that his team had worked hard.

“For the effort that the guys put in, I feel we at least needed to come away with a draw.”

The PE side’s chances were dealt a blow early in the game when Cloudius Sagandira, one of the team’s most prolific strikers, was red-carded.

“It was always going to be difficult with only ten men on the field.”

Sagandira was not the only casualty of the evening. Kieran Koert sustained a hamstring injury and was replaced by Lukhanyo Rasmeni for the last 30 minutes of the match.

Harrison said the young player made a positive impression on him and would likely crack the nod for next Monday’s game.

“He made a world of difference once he was on the field. He showed he was hungry and eager to play. I can see he wants to contribute to the team.”

Harrison said the team would be focusing on improving their concentration during the week; an aspect he felt let them down on Monday evening.

“The strategy was to move the ball up the field and out of play, but we lapsed and that’s how the second goal was scored by UWC in the second half.”

Although Harrison was happy that the team created many opportunities, he wanted to fine-tune their ability to convert them into goals.

The Madibaz will tackle the University of Free State (UFS) on Monday, August 18, in Bloemfontein.

“This will be another tough assignment, as they’re in the top four on the log. We’re confident that we’ll be ready for them and we’re going to give it our best shot.” 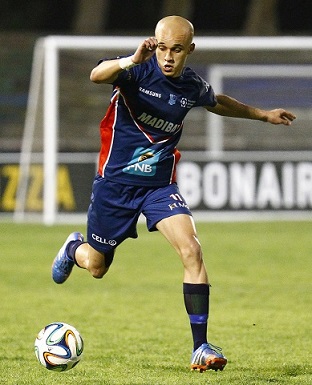 Madibaz player Kieran Koert in action during the match against University of Western Cape on August 11 in Port Elizabeth. Photo: Michael Sheehan/SASPA