The NMMU Madibaz have all but booked their spot in the Varsity Football semi-finals after a dominating 3-0 victory over the University of Limpopo in Port Elizabeth on Monday night.

The Madibaz ran rampant in front of a jubilant home crowd to move into third place overall on 10 points, a mere two behind joint log leaders the University of Johannesburg and North-West University (Pukke).

According to Madibaz head coach Graeme Harrison, the final match of the round-robin section would be the game changer.

“I said from the start that this competition was going to spring a lot of surprises. I think it’s a good advert for Varsity Football to have so many teams in the mix and the result going down to the wire.”

Harrison said Limpopo, who are second from the bottom, had come out all guns blazing from the kick-off.

“They were playing for pride, so we expected a bit of a tough game and they pushed us.”

Although the Madibaz had a number of chances to score, they were unable to convert, taking a goalless deadlock into halftime.

Three minutes later, Onela Beqezi put the ball into the top right corner of the net to give the Madibaz a comfortable 2-0 lead.

FNB Man of the Match Simamkele Thobi sealed the victory with a great finish from a square ball by captain Kurt Duff to make it 3-0 at the final whistle.

“The defence are always the unsung heroes – they were absolutely outstanding.

“I’ll be looking for the same commitment and performance from all the players in the last couple of games.”

He said his men were happy to have pleased their local fans, who turned out in their numbers to support the team in their last home match.

“Next week it’s anybody’s game, so I think people will be glued to their television sets.”

Facing Tuks, to whom the Madibaz lost in last year’s final, would be a fitting conclusion to their round-robin campaign, said Harrison.

“The previous results don’t count for anything. What’s important now is that we focus on Tuks and get a victory there to cement our place in the semi-final.

“They’re obviously a bit wounded now because they lost against UWC. But a wounded animal is a dangerous one.”

He said it would be a do-or-die affair for both sides, with Tuks needing to take an outright victory.

“A draw might just knock them out of the equation. But we’re not going for a draw; we’re going for a win and so will they.” 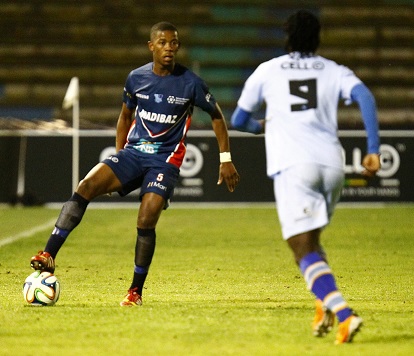 Defender Athini Bisha (left) was a crucial component of the NMMU Madibaz’s 3-0 victory over the University of Limpopo in Port Elizabeth on Monday night. Photo: Michael Sheehan/Saspa