More than 1 200 runners and walkers braved the blustery conditions to take part in the inaugural SPAR Family Challenge in East London on Saturday.

Wearing the bright green official T-shirts, families of all shapes and sizes streamed onto the Beaconhurst School fields in Beacon Bay for the 10km road race and 5km fun run.

Local resident Gogo Maqoyi, 50, brought her extended family – ranging in age from nine years to half a century – to enjoy the day.

“There are 10 of us here today. We took part because it’s a family race,” said Maqoyi.

“We’re doing it for health reasons, for fitness, but also for enjoyment. I love athletics – I’m a runner but not competitively of course!”

Yolanda Blignaut, 40, said the event had been the perfect introduction to East London for her family, who had recently relocated from King William’s Town.

“It was awesome except for the wind. But that was just a minor factor – we weren’t going to let that spoil our fun.”

Blignaut said she and husband Clarence, 52, had completed the 10km “for a bit more of a challenge”, while their 14-year-old daughter, Lesley, and 11-year-old son, Duncan, had participated in the 5km fun run.

SPAR Eastern Cape advertising and promotions manager Wendy Westraadt said she was delighted that so many East Londoners had turned out despite the weather.

“The participants pitched up and took part with all the positive attitude that we expected of East London.

“We look forward to seeing that number grow year after year and making the race as big if not bigger than our Women’s Challenge in PE.”

Proceeds from the event went to the Loaves and Fishes Network, which focuses on early childhood development among disadvantaged communities in the Eastern Cape.

Accepting the R20 000 cheque on behalf of the organisation, board member Kim Schmidt thanked the families present for their support.

“You can rest assured that the money will be used to help the children and ensure that they’re healthy, happy and getting a good education.”

The 10km race was won by Born 2 Run athlete Luthando Hejana in a time of 39:27, while his club mate Stephanie Smith scooped the laurels in the women’s race in 46:18.

Mbuyiseli Mema of Overtakers Sports Club claimed the men’s 5km victory in 20:12, while Giselle Pauls was the first woman home in 27:01. 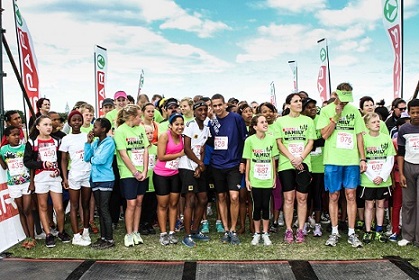 Runners line up at the start of the 5km race of the inaugural SPAR Family Challenge that took place this weekend in East London. Photo: Dean Venish