The University of Johannesburg is gearing up to host its first ever fixtures in the national Varsity Football tournament in the wake of the Fifa World Cup.

The second edition of the nine-week tournament, which starts on July 21, will see the top eight footballing universities do battle on grounds across the country.

UJ will host three home games on July 28, August 18 and September 1. The first and last of these will be played at the AW Muller Stadium on the Auckland Park Bunting Road campus, while the second match will be televised live from the Soweto Campus sports complex.

“We’re particularly excited to see the football culture unwrapping among the students as the tournament draws closer.

“With the soccer world cup atmosphere still in the air, we cannot ask for a better time to take on Varsity Football.”

Naude said organisers were looking forward to capacity home crowds at each of the 2 000-seater stadiums.

“We will do what UJ does best – create an amazing atmosphere, with the UJ Samsung cheerleaders, fireworks, halftime giveaways, music and emcees. We continuously strive to create the ultimate student sporting experience!”

She said the institution had successfully hosted various other codes in the Varsity Sports stable, including hockey and athletics, as well as the high-profile Varsity Cup rugby competition.

UJ sports events manager Niamh Faherty added that the university had previously also held the Ussa tournament, which acts as the qualifying event for Varsity Football.

“That was a week long and there were approximately 800 players, so this one is much more intimate, which gives us the opportunity to focus on the ‘wow’ factor.”

“We’re bringing back the UJ Football Fridays, starting with the cheerleaders and Varsity Sports shirts.”

She said a fun foosball competition between the residences and day houses would serve as the official campaign launch, with various prizes up for grabs through UJFM and the university’s social media platforms.

Although there are no road closures during the event, Faherty advised spectators to park on the Kingsway campus due to limited parking facilities and catch the university bus service to the Bunting Road stadium.

Tickets are available at the gate on game day at a cost of R20, and on www.varsitysportssa.com for R10. Spectators who register on the website will receive two free tickets per person. 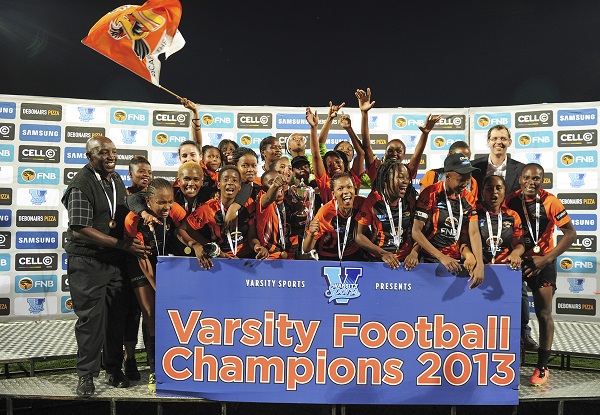