The NMMU Madibaz will field a full-strength attack when they face newcomers the University of Johannesburg in their first away game of the Varsity Football tournament on Monday night.

Head coach Graeme Harrison has made just one change to the line-up that secured a 2-2 draw against last year’s semi-finalists NWU in Port Elizabeth earlier this week.

Replacement striker Simamkele Thobi will take an enforced rest following a thigh injury, while his spot on the bench will be occupied by fellow striker Reginald Mabokane.

“I feel Reginald will bring a different dimension to our game because of his skills,” said Harrison.

“We want to be more attack-minded, therefore we have been working hard in training to improve our ball possession and sharpen up our goal-scoring skills.”

Although Madibaz striker Kieran Koert put two goals into the back of the net to take a 2-1 lead at halftime against NWU, the home side were driven onto the back foot in the second half until the opposition broke through their defences for the equaliser in the 77th minute.

He said his players were determined to rectify their mistakes from the previous game and would not be making a further error in judgement by underestimating UJ.

“It’s their first year in Varsity Football, so they will want to make an impact on the competition, especially on home soil.

“We expect a tough, physical game but we are ready for the challenge and whatever they throw at us. We are determined to win the game.”

Last year, the PE-based outfit were unbeaten in their march to the finals before losing the inaugural champion’s trophy to Tuks.

“There is a fantastic team spirit in the group and the confidence is sky high,” said Harrison.

“Every player is determined to put in a good performance so that we can achieve our goal by taking all three points on offer.”

The match kicks off at 6pm at UJ’s Bunting Road Campus in Auckland Park. 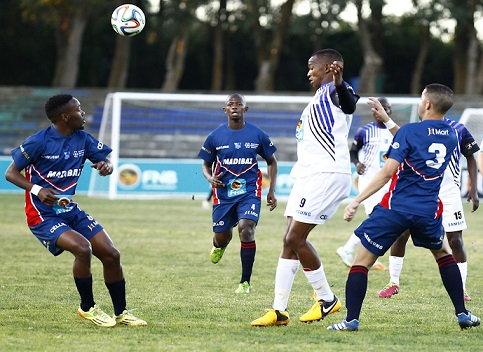 The NMMU Madibaz will field a full-strength attack when they face newcomers the University of Johannesburg in their first away game of the Varsity Football tournament on Monday night. Photo: Michael Sheehan/Saspa