The NMMU Madibaz are determined to bounce back after losing out to Varsity Football minnows the University of Johannesburg in their first away game of the tournament on Monday night.

According to Madibaz head coach Graeme Harrison, his team put up a valiant defence before going down 3-0 in front of a large and vocal UJ crowd.

“In the first half we were quite competitive,” said Harrison. “UJ actually had the major share of the possession but we held out.”

After going into half-time without any points on the board, a resurgent UJ dominated in the second half.

“They created chances and eventually scored and we just couldn’t come back from that. We had an opportunity or two but unfortunately couldn’t convert them.”

Bolstered by the home support, the Gauteng-based outfit broke through the Madibaz defences to push through two more goals.

“They were simply the better team on the day,” said Harrison, adding that the crowd had played a vital role in spurring UJ on.

“They really got behind their players – it was like having a 12th man on the field.”

The Madibaz on the other hand were whittled down to nine men in the closing minutes after two of their players sustained injuries.

Striker Cloudius Sagandira had to be stretchered off with a concussion, while substitute Cornelius Matuoane tore ligaments in his knee.

“That was after I’d already made my three permitted changes, so for the last six or seven minutes we had to play with nine men.”

Harrison said Sagandira and Matuoane would undergo further testing this week to determine the extent of the injuries.

But, said the coach, it was certainly not all doom and gloom and that his relatively young squad were determined to improve throughout the nine-week tournament.

“It’s only the second game. If you look at the history of the competition, last year’s champions, Tuks, lost their first two games and managed to make it to the semi-finals and then go on to win the competition.

“We just need to pick ourselves up and work hard and fight for a positive result next week.”

The Madibaz are looking forward to making amends against the University of Cape Town on their home turf in Port Elizabeth.

“UCT are known for their aggressive style of play, so we’ll prepare ourselves for that. We’re up for the fight on Monday night and we’re determined to put on a good show and not disappoint our supporters.”

Harrison said he hoped Madibaz fans would come out in their droves to cheer on and motivate the team.

“Crowd support is very, very important and can make all the difference to the game.” 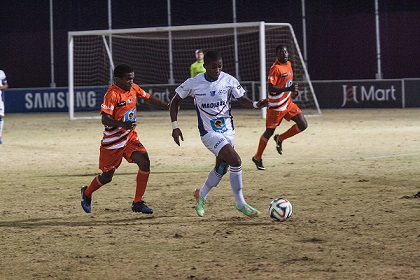 The NMMU Madibaz are determined to bounce back after going down 3-0 to the University of Johannesburg in the second round of the Varsity Football tournament on Monday night. Photo: Nicolene Olckers/Saspa