The NMMU Madibaz held NWU to a hard-fought 2-2 draw in their opening game of the Varsity Football campaign in Port Elizabeth on Monday night.

Madibaz coach Graeme Harrison said his team gave a good account of themselves in front of an enthusiastic home crowd at the Madibaz Stadium.

“Naturally we would have wanted a win but I was satisfied with the team’s performance and happy to come away with one point for the draw,” said Harrison.

The visitors’ Sandile Mbatha drew first blood in the 28th minute when he got a direct shot past goalkeeper Lyndsay Jennings.

Madibaz striker Kieran Koert fired back four minutes later with an equaliser, followed swiftly by a second goal, to take a 2-1 lead at halftime.

“The boys showed a lot of character,” said Harrison.

“They went from a goal down to scoring two goals in quick succession.”

He said it was a particularly welcome return to form for Koert, who earned the Samsung Super Striker award.

“He’s really come back strongly after being injured last season. We’ve been looking after him and nurturing him to ensure that he was ready for this competition.”

In the second half, a motivated NWU took the game to their hosts, who responded strongly in defence.

“Our players really showed tenacity in holding NWU at bay. Our opponents were losing, so they had to throw caution to the wind and go on the attack.”

Harrison said Madibaz captain and FNB Man of the Match Kurt Duff had led by example to rally his team.

“As defensive midfielder he’s a solid rock. He’s an excellent leader and organiser and has earned the guys’ respect.”

He attributed Sifiso Ngwenya’s equaliser in the 77th minute to a possible lapse in concentration towards the end by the home team.

“We have a lot of new players in the side and after this first game I think they’ll understand the rigours of this competition better and also what is expected of them.”

The Port Elizabeth-based team were unbeaten on their march to last year’s final, which they ultimately lost to Tuks.

But, said Harrison, they would not be relying on historical performances to get them through the nine-week tournament.

“We’re just going to take it one game at a time. We’ll be looking for a top-four finish and then, if all goes well, a home semi-final.”

With three of Monday night’s four matches ending in a draw, the round-robin competition was still wide open, he said.

The Madibaz will face Varsity Football minnows the University of Johannesburg next in Gauteng on July 28.

“They also conceded a draw last night against UWC but we won’t be underestimating them. We will be looking for a full haul of points.” 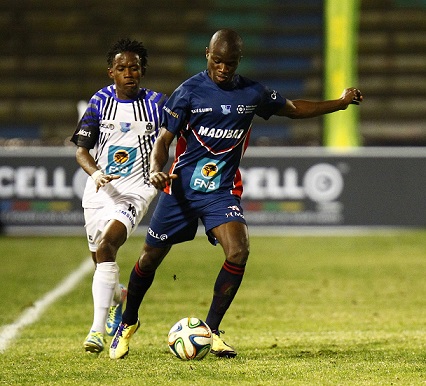 Madibaz player Alexander Owusu prepares to pass the ball during Monday night’s clash with NWU in Port Elizabeth. The home team held the visitors to a 2-2 draw at the Madibaz Stadium. Photo: Michael Sheehan/Saspa